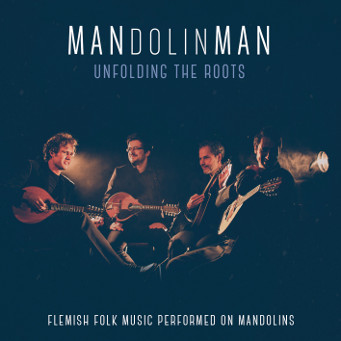 “Playing these tunes on this instrument gives a whole new, sparkling sound to the ancient tunes” folkworld.de

‘Unfolding The Roots’ is the latest album of traditional Flemish folk music with a mandolin twist by Belgian four-piece band, MANdolinMAN. After their first album ‘Old Tunes, Dusted Down’ and a second album on which they explored the bossa nova style, MANdolinMAN have returned to their roots.

‘Unfolding The Roots’ sees the foursome dig even deeper into Flemish folk music and once again breathe new life into old tunes and melodies from the province of Flemish Brabant. Played on four mandolins, the music takes on new forms and the historic melodies are injected with contemporary vigour.

‘Unfolding The Roots’ is a microcosm of Flemish folk music with 12 polkas, waltzes, mazurkas and the long line folk dances made up of couples on either side, the contra dances.  The arrangements are pristine, a credit to the album’s music director and MANDolinMAN’s founder, Andries Boone. Other musicians include mandolinists Dirk Naessens (Black Velvet, Amorroma and MacRahl) and Peter-Jan Daems (Tantra and famous guitar trio Snaarmaarwaar) and mandocellist Maarten Decombel (Naragonia Quartet, Snaarmaarwaar and Les Tisserands).

MANdolinMAN has the goal to preserve the traditional music of the Flanders region. Founder of MANdolinMAN, Andries Boone is the son of one of Flanders’ most well-respected ethnomusicologists, Hubert Boone, who made it his life’s work to research, find and collect one of the largest collections of traditional Flemish music. MANdolinMAN’s first  album, ‘Old Tunes, Dusted Down’, was devoted to Hubert Boone’s impressive field work.

Hubert Boone carried the torch for traditional music that had been so previously well-lit by forebears John and Alan Lomax in their preservation of the American folk and blues tradition as well as Cecil Sharp’s work to give new life to the English folk song. ‘Unfolding The Roots’ is a gentle journey through Flemish folk-lore with stand-out arrangements on the opening track ‘Polka Charleston Nederokkerzeel’ and ‘Waltz Eppegem And Zemst.’ It is no wonder that World Music Central described MANdolinMAN’s “extraordinary skilled playing … with the vivacity often found in Northumbrian or Appalachian folk”.  ‘Unfolding the Roots’ is released through ARC Music on 31st March, 2017.

Andries played with many well-known pop artists in Belgium like Paul Michiels and Guy Swinnen. He currently plays with Lennaert Maes and Guido Belcanto. He is founder of MANdolinMAN.

For several years, Dirk played with Black Velvet, Amorroma and MacRahl, all popular folk bands in Flanders. He became well known as the fiddle player of Urban Trad, with whom he went to the Eurosong Festival and toured all over Europe for more than 10 years. More recently he played in the project The Broken Circle Breakdown, a theatre piece of the famous Belgian actor Johan Heldenbergh.

Maarten is one of the best-known folk-guitarists in Flanders and Wallonia. He plays with several well-known folk bands such as Naragonia Quartet, Snaarmaarwaar and Les Tisserands, and in 2012 he released his first solo album, October Sunrise.

For several years, Peter-Jan played with the Flanders-based band Tantra, and until February 2013, also with the famous guitar trio SnaarMaarWaar.

« New Album ‘Fertile Paradoxes’ by Amine & Hamza
Khamoro, The Band that Brings A Little Sun to the World »