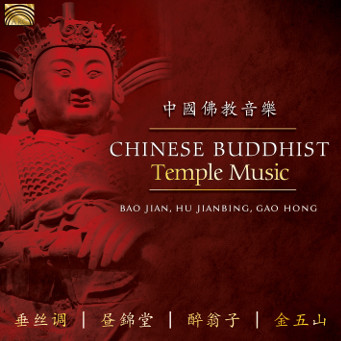 ‘Chinese Buddhist Temple Music’ is a new album from the talented Beijing Trio comprising Bao Jian, Hu Jianbing & Gao Hong. Together, they create the magic of Chinese temple music, with instruments such as the haunting sounds of the guanzi (an oboe-like double-reeded folk wind instrument); the ancient sheng (mouth-blown, free-reed instrument with multiple vertical pipes) and the beautiful sounds of the pear-shaped pipa, often referred to as the four-stringed Chinese lute. The musicians on ‘Chinese Buddhist Temple Music’ are all virtuosos of their craft.

Chinese temple music is an ancient tradition passed down through the generations. Each temple has their own special style of music and ‘Chinese Buddhist Temple Music’ comprises four beautiful, contemplative pieces from the Beijing Zhi Hua Temple, built during the Ming dynasty in 1443. The Zhi Hua Temple music developed from a combination of court, Buddhist temple and folk music, played here in its purity.

Bao Jian is a maestro of the guanzi (a double-reed folk wind instrument of ancient Chinese origin) and has made numerous appearances as a soloist and chamber musician worldwide. Hailed by The Berlin Daily Post for his “pure hallowed music from the East,” Mr. Bao has enchanted audiences with his virtuosity and poise. Bao boasts an impressive list of awards including the 1998 Pro Musicis International Award in New York and the First Prize in the 1995 International Chinese Ethnic Instrumental Competition in Beijing.

Hu Jianbing founded the Chinese Performing Arts of North America organization, of which he is the president. Mr. Hu joined the Silk Road Ensemble founded by Yoyo Ma and has collaborated with the San Francisco Symphony and Seattle Symphony to perform compositions of “Sheng and Orchestra” as soloist.

In 2005 Gao Hong became the first traditional musician to be awarded the prestigious Bush Artist Fellowship, and in 2012 she became the only musician in any genre to win four McKnight Artist Fellowships for Performing Musicians. Gao’s composition for solo pipa, ‘Flying Dragon’ won the 2012 Global Music Award - Award of Excellence Solo Instrumental (Gold Medal). In 2016, Gao Hong completed the first ever pipa method book written in English published by Hal Leonard, the world’s largest sheet music publisher. China’s foremost music publication, People’s Music, wrote of Gao Hong that
“... like the famous Luoyang peony, she has gradually emerged as the best of all beautiful flowers... her performance has extremely strong artistic appeal and belongs under the category of ‘fine wine’... the more you listen, the more beautiful it gets...”