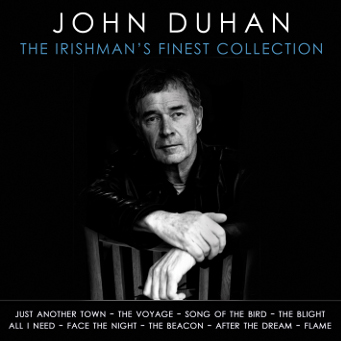 ‘The Irishman’s Finest Collection’ is a selection of original  compositions by Ireland’s legendary songwriter John Duhan. Each song has been carefully chosen by John from his previous epic albums including ‘Just Another Town’, ‘To the Light’, ‘The Voyage’ and ‘Flame’ – the names of which correspond to each of the four chapters of his lyrical autobiography, ‘To The Light’. The song ‘To The Light’ is in John’s own words ‘a hymn of faith’.

In a career spanning 50 years, John Duhan’s songs have been covered by Christy Moore, The Dubliners and Mary Black and yet despite all his success, John manages to keep the spotlight on his songs, lyrics and stories. John will be the first to admit: “I’ve never followed trends or fashions since I started out as a folkie”.

Each song on ‘The Irishman’s Finest Collection’ is a story from John’s life and musical career which started in his home city of Limerick in southern Ireland. ‘Just Another Town’ is more of a “hymn to Limerick” than just a song, as John says in his own words: “There was a lot to be disturbed about in the town (as in all towns), but on certain summer evenings when the sun was going down and the brass band was practising up the hill, I wouldn’t have wanted to be anywhere else”.

John’s musical career started as a fifteen-year-old front man with ‘Granny’s Intentions’, the most popular beat group in Ireland in the 1960s. After rousing Dublin with their soul touch, they moved to London, were signed to the prestigious Deram label, enjoyed considerable success and disbanded before John was twenty-one. John started writing folk songs, poetry and prose.

Songwriters strive to write the perfect song. Many get close, few succeed. John Duhan did write the perfect song. ‘The Voyage’ –  a song about how the love and strength of a marriage and family can help one overcome life’s obstacles –  was written by John in 1987. It was loved but not widely known until Christy Moore covered it in 1989, turning it into an international success and going on to become his most popular song to date.

It is estimated that ‘The Voyage’ has been performed at over a million weddings worldwide and is one of the most popular songs performed at anniversaries and funerals as well. As Limerick photographer Gerry Andrews relayed to John, ‘The Voyage’ has reached as far as the remote Omo Valley in Ethiopia where village elders request it to be played in the few shops that carry electricity. The emotional impact of ‘The Voyage’ continues on,

“Life is an ocean, love is a boat
In troubled waters it keeps us afloat,
When we started the voyage there was just me and you,
Now look around us, we have our own crew.”

On his website, John has published some of the hundreds of letters he has received from folk around the world who have been touched by his songs (mostly ‘The Voyage’), such as this moving letter: “Last Thursday I buried my darling wife of 58 years married, and she went to your most beautiful song, The Voyage. Every word seemed to be us; even a son who mutinied but came back to us. Thank you….”

Whether covered by professional singers or heard by folk music fans in the comfort of their own homes or steamy bars, John Duhan songs leave an indelible mark on the listener. As editor of Hot Press, Niall Stokes predicted, ‘The Voyage’ would be around for centuries from now, after the most popular songs of our time are long forgotten.

‘Song of the Bird’ on ‘The Irishman’s Finest Collection’ relays a beautiful but poignant moment in John’s childhood. Having arrived home one day with a wounded bird, John’s mother allowed him to keep it in their shed where the bird was nursed back to flight. Shortly after John’s mother passed away, John penned ‘Song of the Bird’.

‘Don’t Give Up Till It’s Over’ was inspired by and is dedicated to John’s father, a  singer who used to sing in bars around Limerick in John’s childhood. In John’s own words, his father had a “baritone voice, with the emphasis on the bar”. A family outing inspired ‘The Beacon’ after a trek up a hill behind Kylemore Abbey, the Benedictine monestry founded in 1920 on the grounds of Kylemore Castle in County Galway.

The last song on ‘The Irishman’s Finest Collection’ is ‘The River Returning’. John’s own words best explain this song, “ The River Returning plumbs emotional memories of my father during his dying days and takes me back to the source of my first inspiration – the river Shannon”.

Sylvie Simmons (author of the acclaimed Leonard Cohen biography ‘I’m Your Man’) had this to say about John’s prose autobiography ‘There is a Time’: “When I started to read it I couldn’t put it down. He has such a way with words...”. Christy Moore has termed John “One of our greatest songwriters”, and the late Ronnie Drew described him as “one of my favourite songwriters”.

Yet, despite all the great accolades and floods of fan-mail that John Duhan consistently receives, his character is best summed up by the award-winning author and broadcaster, Tony Clayton-Lea: “A man who cares not a whit for trends, but rather one whose reason for living is, perhaps, to transcend creative limitations.” And in this he has succeeded. ‘The Irishman’s Finest Collection’ is released internationally through ARC Music on January 26th, 2018.