The Ultimate Guide to Welsh Folk compiled by Cerys Matthews 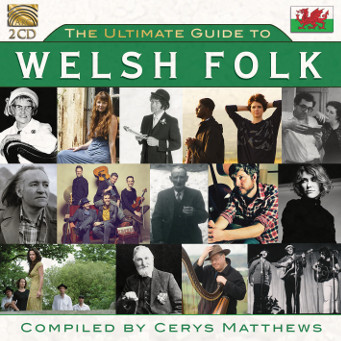 ARC Music owner Julia Beyer invited Cerys Matthews to compile ‘The Ultimate Guide to Welsh Folk’, as Cerys writes, “… pulling together a kind of ‘definitive' collection like this … is rather like fishing in the vast oceans of the earth… So it was with the largest net possible that I set out to the musical rivers and coasts of Wales. My aim was simple, to try and include some of the most beautiful and recognisable songs of the Welsh folk repertoire, and also, to bring together the voices of some of the most well-loved and influential artists that have sung these over the years.”

This collection includes musicians who have made outstanding contributions to Welsh folk including Welsh language campaigner and founder of Sain Records, Dafydd Iwan’s ‘Beth yw’r haf i mi?(What does summer mean to me?)’ and the late Meredydd Evan (1919-2015) on ‘Si hei lwli’. Affectionately known as the ‘Welsh Cecil Sharp’, editor and historian, Meredydd Evans, along with his wife, Phyliss Kinney, helped to both promote and preserve Welsh song and music. Meredydd worked alongside fellow ethnomusicologist Alan Lomax for a number of years.

Welsh harpers include some of the world’s best. Colloquially known as ‘telyn deires’, the triple Welsh harp has a special place in folk music, featuring as it does three rows of strings compared to the conventional one row. It is fitting that the ‘Queen of Harps’ Nansi Richards (1888-1979) launches the album with ‘Pwt ar y Bys’ – ‘A Little Something for the Fingers’. Nansi Richards remains a legend in the genre and three of her triple harp pupils – Llio Rhydderch on ‘Dafydd y Garreg Wen’ and Dafydd and Gwyndaf from Ar Log with the track ‘Tra bo dau’– all feature on ‘The Ultimate Guide to Welsh Folk’. Robin Huw Bowen (‘Gypsy Waltzes’) is arguably the world’s leading Welsh harpist and as Cerys writes: “Robin is the only full-time professional Welsh harpist specializing solely in the Welsh triple harp, and his influence on the world of Welsh folk music and harping has been far-reaching”.

The Welsh tradition of plygain songs is celebrated on ‘The Ultimate Guide to Welsh Folk’ on Parti Fronheulog’s arrangement of the traditional ‘Ar gyfer heddiw’r bore’. Plygain services were traditionally held at local parish churches on Christmas Day between 3-6am as Cerys writes,

“A typical plygain service would include a procession of men carrying candles to the local church, where a morning service was held, followed by carols that could go on for three hours or more... The word plygain has been said to have roots with the Latin word ‘pullicantio’, which means ‘when the cock crows at dawn’… Services are still held in Wales, especially so in Mid-Wales and Montgomeryshire. The carols are usually sung in close 3-part harmony, as you will hear in this recording, and by men, but the carols are also sung solo and as a party of mixed voices.”

Male choirs are an intrinsic part of Welsh musical tradition dating back centuries. First formed in 1891 in the north Welsh village of Rhosllannerchrugog, Rhos Male Voice Choir has since been in the forefront of male voice singing. The choir sings ‘Tydi a roddaist’ (Thou gavest), written by Arwel Hughes, on ‘The Ultimate Guide to Welsh Folk’, originally from the album ‘Music From The Welsh Mines’ released by the Moochin’ About label. ‘Tydi a roddaist’ was recorded in London in 1957, as Cerys tells the background story with some of the choir still “in bandages following an accident the day before in the colliery where they worked. These harmonies are ridiculously moving … the essence of Welsh song is rooted in harmony”. Cerys quotes from one of the UK’s earliest travel writers, Gerald of Wales, about the power of song in Welsh choirs: “In their musical concerts they do not sing in unison like the inhabitants of other countries, but in many different parts… You will hear as many different parts and voices as there are performers who all at length unite with organic melody”.

Max Boyce is a much-loved and respected artist around the world whose album ‘We all had Doctors’ (EMI) reached #1 in the album charts and earnt him a place in the Guinness Book of World Records as the only comedy album to achieve that position. Max sings the traditional song ‘Bugeilio’r Gwenith Gwyn’ (Watching The White Wheat) on ‘The Ultimate Guide to Welsh Folk’. Other notable singer/songwriters include one of Wales’ traditional balladeers, Bob Roberts, singing ‘Moliannwn’ (Let’s celebrate!); Chris Jones who has been singing trad folk songs from Wales and beyond for over 20 years; Bob Delyn (aka Welsh poet and musician, Twm Morys) and the award-winning Gareth Bonello who performs as ‘The Gentle Good’. Gareth – who won Welsh Language Album of the Year, 2014 – performs a haunting love song, ‘Titrwm Tatrwm’.

No collection of Welsh folk music would be complete without the music and songs of the late Ryan Davies, who was recognized as ‘the most versatile artist Wales has ever known - comedy actor, musician, singer, and songwriter’. Ryan became a household name when he worked alongside Ronnie Williams as a double act featuring on the BBC network in an English-language show and can be heard singing the traditional folk song ‘Myfanwy’ on ‘The Ultimate Guide to Welsh Folk’. Phil Tanner – lovingly referred to as the ‘Gower Nightingale’ – was remembered in a BBC Radio 4 tribute by Wynford Vaughan-Thomas who referred to him as “the voice of the sanest, happiest, kindest eccentric I ever knew”.

Folk groups such as pioneers Plethyn also feature on ‘The Ultimate Guide to Welsh Folk’ alongside BBC Radio 2 Folk Awards winners for Best Album 2015, 9Bach. As Cerys indicates: “With their unmistakable sound of Welsh language vocals shimmering alongside swamp guitar, harp, rhythm section and a subtle use of technology, 9Bach have been widely credited with giving a new voice to Welsh song”. Their second album, Tincian (Real World) was voted Best Album at the 2015 BBC Radio 2 Awards by the public. Here they are with their distinct version of a classic Welsh love song, ‘Pontypridd’, from their debut album – 9Bach. The Hennessys, regulars on BBC Wales TV and radio – Frank Hennessy hosts Celtic Heartbeat BBC Radio Wales –  perform the beautiful traditional song ‘Ar lan y môr’ (‘By the sea shore’) on ‘The Ultimate Guide to Welsh Folk’.

‘The Ultimate Guide to Welsh Folk’ includes a rare talk from the lively Pembrokeshire local Ben ‘Bach’ Phillips, courtesy of Topic Records. Recorded in 1953, Ben Phillips earnt the moniker ‘Bach’, meaning ‘tiny’ in Welsh, a tiny figure with a huge voice who, according to Cerys, “would often be seen jumping or be stood on a table to holler out favourite ballads and songs. Here we hear Ben talking about visiting Bristol for the first time... where he says: ‘I wish I could go back to my old days again, but you can’t go back at all, you must keep going on’”.

Cerys Matthews is a cultural roving reporter for the BBC Television’s The One Show, writes and presents documentaries for BBC Radio 4 and 2, and TV, including two series on the history of Welsh folk songs for S4C: Y Golden Faled; the Ballad Tree. She has curated for theatres and the Tate Modern, was artistic director of the opening ceremony of the World Music Expo in Cardiff in 2014, and was awarded a St David Award for Services to Culture in Wales that same year. Cerys is Vice President for Shelter and the Hay Festival of Literature and the Arts, is patron of the Dylan Thomas Society and Ballet Cymru, and is President of Gwalia Male Voice Choir, London.

As Cerys writes in her own words about ‘The Ultimate Guide to Welsh Folk’ :

“Here you’ll find players from different regions, sitting next to each other, singing in different dialects; you’ll hear songs recorded in different decades, with different production techniques, and musicians from different camps who will pull and push with and against the definition of the folk genre. The end result, I hope, will be a beautiful tapestry of sounds, one which might work some ways to giving you an idea of what's unique to the Welsh folk sound… so treat it as a place to start, a friendly set of signposts you might use to wander deeper into the archive of the past 100 + years.”

‘The Ultimate Guide to Welsh Folk’ is a rich and rare collection of Welsh folk carefully compiled by Cerys Matthews from the ‘The Land of Song’. It is as much a historical record of Welsh folk through the ages as a musical journey. Released worldwide through ARC Music on 27.10.17.