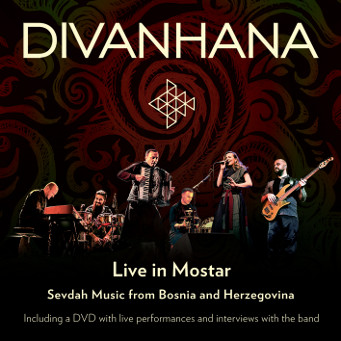 ‘Live In Mostar’ is the complete Divanhana studio and live performance experience. The album has a total of 11 carefully-selected recorded songs on the CD and DVD (the same set on each) and just under two hours of Bosnian sevdah, Divanhana-style. ‘Live In Mostar’ is a chance to relive the highlights of Divanhana’s mega 11-month tour from February 2016 in the Bosnian city of Zenica through to 31st December in a triumphal concert in their home town of Sarajevo. ‘Live In Mostar’ DVD is mostly recorded from the concert held at Mostar’s National Theatre on 28th April, and also features band interviews, commentary and a close insight into the music of Divanhana.

Divanhana’s musical journey started in Sarajevo’s Kriterion concert hall in February 2012 where they performed their first official concert played to a handful of invited friends. They persisted. In fact, Divanhana chose the name of their first international release ‘Zukva’ (Belgrade Multimedia Music/ARC Music), carefully. ‘Zukva’ is the name of a sturdy Balkan apple, which has a tenacity to survive in harsh conditions as well as an ability to be successfully grafted onto other types of apples, just like the traditional music of the Balkans, sevdah - the music of longing and lost love.

The six musicians comprising Divanhana have always shared a common goal: to help bring about a sevdah revival in Bosnia-Herzegovina which their tour has certainly achieved. As pianist Neven Tunjic relays, “the concept of the ‘Zukva’ tour was to bring sevdah back to halls and cultural institutions across Bosnia Herzegovina with very affordable prices, as well as to bring sevdah back to the youth”. Traditional Bosnian sevdah tracks on ‘Live In Mostar’ include the late accordion legend Jovan Petković’s ‘Da sam ptica’ and poet Osman Đikic’s ‘Đaurko mila’.

There is no doubt that vocalist Naida Čatić – who succeeded an equally astounding vocalist, Leila Čatić (vocalist on ‘Zukva’) – has catapulted the band to the live performance prowess it has achieved today. Witness the soulful a capella performance of ‘Đaurko mila’ (at 24:05 on the DVD) with lyrics by Bosnian poet Osman Đikic, written for his beautiful muse Zora. Zora was forbidden to get close to Osman for politico-social and religious reasons but despite all, their binding love overcame all, and it was in Mostar that they were reunited until their last days. As Naida tells a silenced audience at Mostar’s National Theatre, “the love stories written by great poets and authors live amongst us forever”.

During their 11-month tour, Divanhana performed at more than 60 concerts (at least half sold-out) in 12 countries including Serbia, Germany, Austria and Switzerland. Divanhana received both the local, national and international media that most bands dream of, in fact, this tour gave Divanhana national fame to the point they are now referred to as “… the most recognizable band from Bosnia and Herzegovina, a kind of identity card of the country” (Lola Magazine).

“…a Bosnian band to watch out for…”

“Completely playful in tone, ‘Zukva’ is a perfect introduction to sevdah music.”

fRoots: “ … their greatest strength is their playing of the beautiful moment.”

Ascentor, review by Sergey Oreshkin: “Spicy, fiery, sensual and bright, like the land where it was made, this album deserves the highest recommendation.”

DVD: Live performances and interviews with the band - 60:00