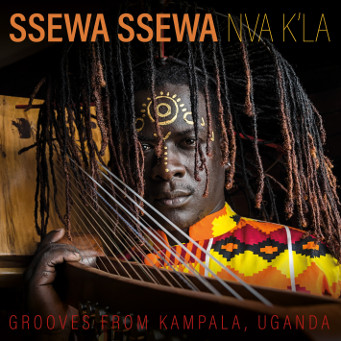 ‘The first step toward success is taken when you refuse to be captive of the environment you find yourself in’, saysforward-thinking Ugandan multi-instrumentalist Ssewa Ssewa, reflecting on the day he was prompted to invent the Janzi (pictured left). The 15-string, non-magnetic instrument was created after a fellow musician was unable to pass through airport security metal detectors with his traditional adungu.

The Janzi is now celebrated by local learning musicians and is the only patented string instrument in Uganda.

Ssewa Ssewa was born and raised in a musical family in hometown Kampala, Uganda. His childhood immersion in music and rhythm has made him the inspirational leader and teacher he is today. His first recorded album - Nva K’la - reveals the musical culture, songs and stories he grew up with, weaving these traditions together with a modern and global sound.

On the opening track of the album you will hear lulling, baritone vocals soar over upbeat, rhythmic African beats. ‘Abalangila’ is a denouncement of those who object to the pleasure of others while indulging themselves: ‘Tell the hypocrites to let me drink, let me eat my share before I am gone.’

From the pivotal standpoint of a landlocked country in the African Continent, Ssewa Ssewa has had the opportunity to figuratively and literally observe, glean from and contemplate views of his neighbouring countries and incorporate these unabashedly into his music with candid charm.

The second track, ‘Abassese’, takes a nostalgic turn with xylophone and percussion setting the scene of canoes floating through a breeze while Ssewa Ssewa sings the song of fisherman and agricultural craftsmen canoeing in the lake.

Further into the album, ‘Mwagala’ is a celebration of Ssewa Ssewa’s devotion and love to his wife: ‘She loves me, she’s mine, I love her, she’s mine… everything that I know, I’m blind to the rest’ sung to a more funky, soulful backing. Ssewa Ssewa’s music is a cross-cultural marriage between Uganda, Africa and the world. He seeks to promote Ugandan traditions while modernizing and interweaving them with other international genres to renew the spirit of his indigenous culture: ‘I have been entrusted with a tremendous heritage’.