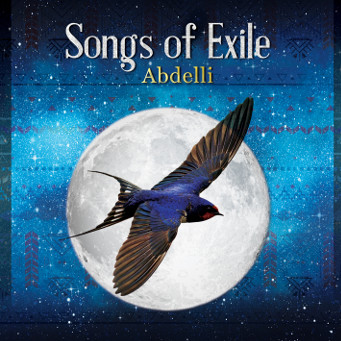 Songs of Exile is an album borne from an incredible life story, exploring the feelings associated with exile, loss and nostalgia.
Sung in Abdelli’s native Berber tongue, he blends his Kabyle vocals and mandola skills with the works of other talented musicians from far and wide. The sad issues that shadow this world are acknowledged, mixed and uplifted by the inspiration and unity of different cultures.

Abdelli Abderrahmane is an Algerian singer, author and composer. During the Algerian War of Independence, whilst his mother was still pregnant, his parents’ village of Kennour was bombed by the French air force. They were forced to flee to the Behalil commune of Afir, which borders the great forest of Mizrana in Kabylia, where Abdelli was born. A year later, the family were forced on again to a town located along the Mediterranean coastline, called Dellys. This was Abdelli’s first experience of exile, a problem that cast a prominent shadow throughout his life.

Abdelli made his first guitar from an empty oil can, a wooden board and fishing line, and was just sixteen when he made his debut at the Algerian Independence Festival in 1974.

Dellys became the birthplace of his musical career, with the Mediterranean Sea being a strong source of inspiration. He made his first guitar from an empty oil can, a wooden board and fishing line, and was just sixteen when he made his debut at the Algerian Independence Festival in 1974.

He then discovered the mandola after hearing the Chaabi musician Chaïd Moh-Esguir (later to become his master). But like so many other Kabyle artists in performing, Abdelli ran into bureaucratic obstacles in the ‘80s preventing him from expressing himself freely in his native Berber language. This sent him, frustrated and confused, into exile. He flew to Denmark, via Brussels, with hopes and dreams of a new life. There he was refused entrance at the border, with no explanation.

Alone and confused, he decided to explore Brussels to pass the time. There he met a guitarist playing the crowds at Gare du Nord. The musician, spotting Abdelli’s mandola, encouraged him to take his place. Abdelli closed his eyes and began to sing in Kabyle. Everybody applauded with great enthusiasm, he says: “I was very moved and touched by their warm encouragement. It did me a lot of good. They made me want to love and respect what I could do even more so than before”.

Following this, a young North African boy named Farid encouraged Abdelli to play at the Grand Place. He promised it was “where all the musicians of the world, passing through Brussels, come to play”. Abdelli still believes to this day that Farid was a guardian angel sent from above in a time of displacement and loneliness.

In 2002, and with an album under his belt, Abdelli was asked to be Peter Gabriel’s supporting act during his ‘Growing Up’ tour in 2002, and in 2003 he released his second album, Among Brothers, on the Real World label. Abdelli went on to perform in Pakistan, Morocco, the United States, Canada, France and Switzerland, as well as notable festivals such as WOMAD.