Songs from the traditional treasure chest of Serbia and The Balkans 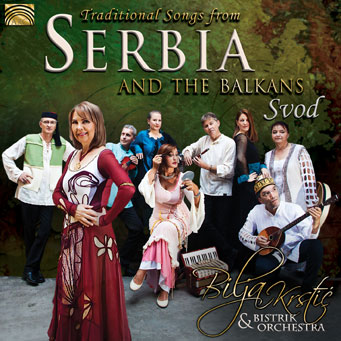 ‘Traditional Songs from Serbia & The Balkans - Svod’ is the fifth studio album produced by Bilja Krstić & the Bistrik Orchestra. Building on their established and seasoned live performance and recording career, this album is a celebration of songs and music from the traditions of The Balkans. Together, Bilja Krstić and Bistrik Orchestra are all golden medal winners for culture as awarded in Serbia (2007) and multi-award winners for their previous albums including ‘Bistrik’ (2001); ‘Zapisi’ (2003) and ‘Tarpos’ (2007) which all won ‘The Prince’ prizes for Best Ethnic albums.

From ‘Korube’ – the old name for a multi-purpose tub made from oak-wood at a spring or well in the Vlasotina region in south-west Serbia – through to the stunning sevdah track ‘Here Comes My Heart’s Joy’ (Evo srcu mom' radosti), Bilja Krstić and the Bistrik Orchestra breathe a fresh lease of life to old songs that, many thought, had reached the end of their journey. This music, with its feelings, atmosphere and flavour from all over the Balkans, comes to you, gathered under a huge, all-encompassing arch called ‘Svod’. ‘Svod’ is the Serbian word for a ‘vault’ or high arch. True to the geographic diversity of The Balkan region, there are diverse delights to be found on ‘Svod’.

Pianist Dragomir Stanojević needs to be acknowledged for his fine work as the producer for the majority of songs on ‘Svod’ with particular reference to the album’s prominent sevdalinka or sevdah tracks such as ‘By The Clear Spring’; ‘Dimitrijo, my Son (Dimitrijo, sine Mitre)' and ‘Here Comes my Heart’s Joy’ (Evo srcu mom' radosti). Sevdah is the romantic and spirited Balkan equivalent of Portuguese fado, ‘sevdah’ itself derives from the Turkish word for ‘love sickness’.

In fact, Bilja has something to say of her close connection to sevdalinka or sevdah music,

“The songs are dedicated to my father who taught me to sing ‘ Čhaje šukarije’, to my dear professor Zorislava Vasiljevi ć who wanted my voice to rise like a phoenix for the ‘Sedi moma na visoko’. To Predrag Gojković Cune whose interpretation inspired me when recording the sevdalinka ‘Evo srcu mom radosti’ (Here Comes My Heart’s Joy).”

Other treasures to find inside ‘Svod’ include ‘Ioane, Ioane’, this being a typical male name characteristic of the Vlachs, part of Romania and Moldova’s indigenous population, renowned for their practice of transhumance – the seasonal migration of livestock to suitable grazing grounds. ‘Beautiful Girl’ is a Roma love song, made famous by the ‘Queen of Gypsy Music’, Esma Redžepova from Skopje.

A historical gem on ‘Svod’ is the Serbian love song ‘The Girl Sits Proud’ (Sedi moma na visoko), taken from the first half of the 19th century and later transcribed by ethnomusicologist M.A.Vasiljević who heard it from a priest, Kosta Popović from Bacina in 1932.

Biljana Krstić (pronounced bill-yana krist-ich) aka Bilja, is an erstwhile member of the exclusive Mediterraneo Orchestra, composed of close to 25 top musicians from all over the world. Bilja’s early interest in singing and music started in the then-Yugoslav pop scene in her teenage years when she performed in a youth choir, and then the popular bands Sunflower and Early Frost. By 1983, Bilja released her first solo album and went on to record another three pop music records, also composing music for many plays at Belgrade’s National Theatre. In the meantime, she graduated from the University of Musical Arts, and started to work with Radio Belgrade as a music editor.

‘Svod’ has been carefully produced maintaining the authenticity of traditional Balkan songs while Bilja Krstić’s distinct and strong vocals sit atop a bed of violin, guitar, piano, tambura, bass and percussion. An engaging and polished journey through the traditional songs from the entire Balkan region which transcends borders and divisions. ‘Svod’ will be released worldwide through ARC Music on the 6th Jan 2017.

Track listing for Traditional Songs from Serbia and The Balkans