Songs from Mexico by ‘Queen of Mexican Song’, Yuly Tovar 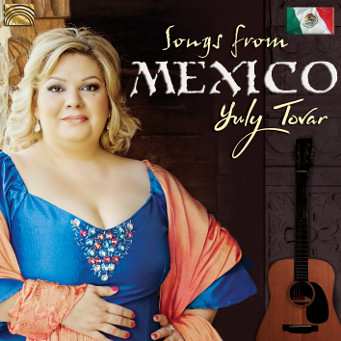 ‘Songs from Mexico’ is the first global release for multiple-award-winning singer Yuly Tovar, who is widely recognised as the ‘Queen of Mexican Song’. Yuly hails from Michoacán state, South Mexico, and is known in her country as an important interpreter of Mexican regional music of the mariachi genre, also venturing into other genres, such as ballad, bolero, norteño and banda. Yuly began her career in 2006, and gradually became well known in Mexico, winning the national contest ‘Record Your Talent’ in 2012.

Yuly has been recognized in several Mexican states and has received multiple awards from various social, journalistic, cultural and political organizations, for her voice, interpretation and her altruism, as she also fosters new singers in the artistic world. Yuly Tovar, a voice that sings with plenty of soul, from Mexico to the world!

« Ahead of new album, master taiko drummer Joji Hirota talks about 40 years of live performances, huge foldable drums and what it takes to be a taiko drummer
Totally Tropical! Sizzling Debut Album by Award-winning Songwriter, Rafael »