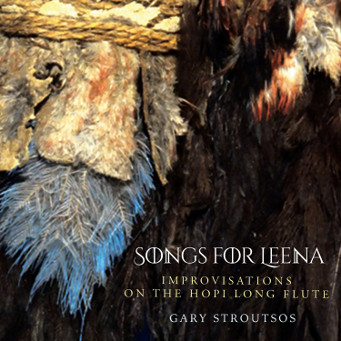 'Songs for Leena: Improvisations on the Hopi Long Flute' by internationally renowned flautist Gary Stroutsos releases 22nd October 2021 through ARC Music. 'Songs for Leena' is a truly unique piece. In genesis, in production, and as a prologue to the more remarkable story it seeks to complete. A testament to the artist's skill, the album was recorded in one take in a Seattle studio. Stroutsos' intuitive and nuanced performance releases the haunting, plaintive sounds almost unheard in millennia – the ethereal tones of the Hopi long flute.

It would be easy and tempting to wax lyrical Stroutsos' proven talent and the captivating listening experience he has produced. Yet, he is at pains to stress that this is 'not about him'. Indeed, 'Songs for Leena' is representative of so much more. The album is merely a steppingstone on the cultural journey of the Hopi people. It represents their commitment to honour their history, revive what was once lost, and reinvigorate and enrich their lands and communities. 'Songs for Leena' was born of bold intentions and restorative purpose, and Stroutsos is honoured to play a part in achieving those goals.

The Hopi long flute, or leena, is somewhat of an enigma. Many Hopi artefacts and teachings – such as textiles and pottery - passed down through the ages, yet the leena was lost. This vital cultural component, long associated with The Cloud People and, thus, the fertility of Hopi lands, was forgotten, buried in the sands of time. In 1931, the surprise discovery of six original Hopi long flutes is where the story of 'Songs for Leena' really began. Studies of these ancient instruments dated them as last played between AD 620-670 and eventually led to the production of a small number of playable replicas.
One of which found its way to one of the few people with the skill and knowledge to help the leena sing once again - contemporary flautist Gary Stroutsos. Having long studied Native American flute traditions, Gary eventually met with Stewart B. Koyiyumptewa – Program Manager for the Hopi Cultural Preservation Office.

News of the reincarnated leena set a buzz in their communities, and Stewart quickly established a desire to reintroduce these unique rim flutes to Hopi society. With the instrument having been hidden from its people for so long, the knowledge to do so had been all but lost. Government funding to produce more replicas was refused. It seemed as if a quest of substantial cultural importance was over before it could begin. Unperturbed, Stewart saw this as a blessing in disguise.
The cause could now be entirely tribally orientated, free from the interference of officials with no understanding of the Hopi. Having been impressed by Stroutsos' skill, instrumental know-how and his evident reverence and respect for Native American culture, Stewart sought out the blessing of the Flute Clan. Gary was then given an unprecedented honour – an invitation to join 'The Hopi Long Flute Preservation Project'. When asked why such a privilege was bestowed to a non-native, Stewart simply replied, 'The flute knows your intent'.

With Gary now on board, the movement gathered pace, leading to the recording of the album. Stroutsos is also developing a teaching system to educate tribe members in the ways of the leena and re-establish the ancient instrument into Hopi society. Recently, a presentation of Gary's work was shown at the Museum of Northern Arizona Arts Festival. The crowds were amazed at the transcendent sounds of the flute, prompting profound interest in the project and all-important goodwill donations. Such a reception has filled both Gary and Stewart with great hope for the success that will be so vital culturally and commercially to the Hopi people. With Arizona suffering its worst drought in recent memory, it is believed that when the songs of the leena once again fill the air, they will bring back the rains that will revitalise the once fecund lands of the Hopi people.

The fundraising effort is a bold undertaking. A positive outcome will have a massive impact of supreme cultural significance to the Hopi.