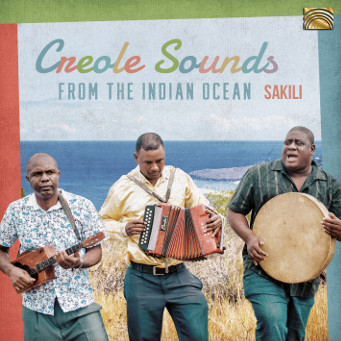 The island of Rodrigues’ most loved séga representatives

Séga is known as the “blues” of the Indian Ocean. From the 17th -19th century, slaves from Africa and Madagascar, transported against their will to Mauritius, gradually forged their own identity in this land of exile. Sakili presents a mix of waltzes, polkas, mazurka, Scottish music and séga drum rhythms which were originally performed by the captured souls at sunset, reminding them of their African homeland.

As ‘hope is seeing light in spite of being surrounded by darkness’, beautiful music was created around bonfires at night during moments of weary rest. This rarely-heard artform with strong historic roots is presented by Sakili, with the hopes of making this music known in Europe and around the world.

Charming stories are explored, such as the true story of Ti Pierre Louis (track 8), the great-grandfather of Sakili’s Vallen Pierre Louis. Ti Pierre Louis worked as a sacristan at the local church. He used to steal food from the priest, who only found out by spotting the left-over food in his long beard. Another day, at his Aunty Maria’s funeral, Ti Pierre Louis was so drunk that he rang the wedding bell tune instead of the funeral one. Other tales of love, home life, traditions, the joy of new year festivities and every day survival is heard.

The members of Sakili are some of the island’s most loved sega representatives: Francis Prosper, the powerful voice behind Sakili, is regarded as the best traditional percussionist of the island. Vallen Pierre Louis is also a recognized artist of the island with a family music background and his own recording studio. Ricardo Legentil plays the island’s characteristic melody instrument, the accordion. Sakili’s first ever concert was not in Rodrigues, but in Düsseldorf, Germany. The tour in Germany, Belgium and Holland was such a success that the trio decided to stay together and continue as Sakili, while Francis Prosper and Vallen Pierre Louis also continue their successful solo careers.