Mr Dhanonday Shrivastav OBE: also known as Baluji Shrivastav is awarded Officer of the Order of the British Empire OBE in the 2016 Birthday Honours List as "Musician, Instrumentalist and Founder, Inner Vision Orchestra. For services to Music." 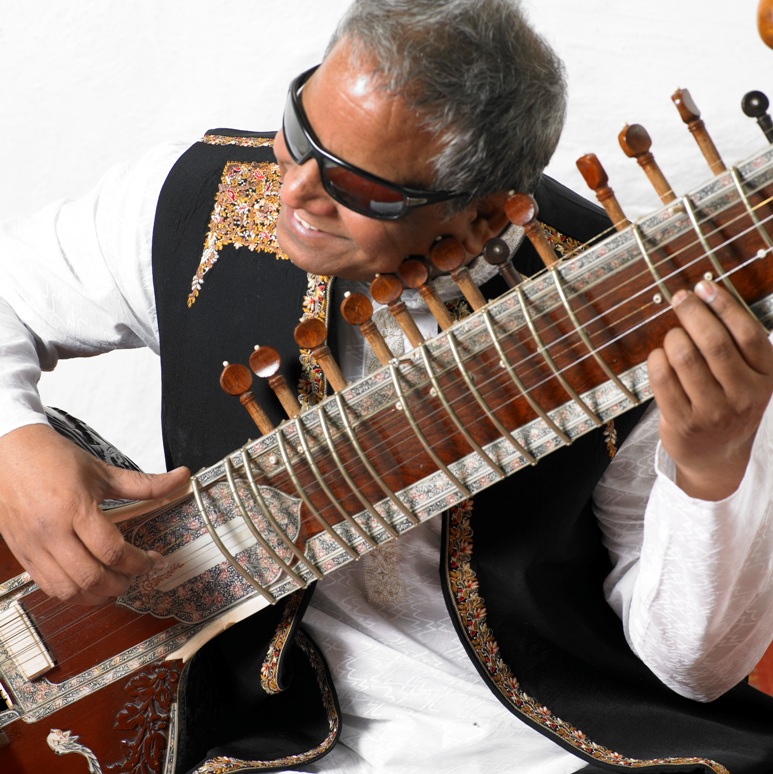 Baluji Shrivastav is a British-Indian multi-instrumentalist who surmounted blindness from 8 months old to become one of the world’s leading sitar players. As a classical Indian multi-instrumentalist, Baluji Shrivastav has performed and recorded with some of the greatest tabla accompanists such as Anindo Chatterji and Ustad Fayaz Khan. Baluji has performed all over the world recording albums with Stevie Wonder, Massive Attack, Annie Lennox, Noel Gallagher and Madness. In 2012 Baluji performed at the Closing Ceremony of the Paralympic Games alongside the British Paraorchestra and Coldplay.

Born in the Indian state of Uttar Pradesh in 1959 , Baluji undertook his first musical training at Ajmer’s Blind School on traditional instruments including the sitar, dilruba, surbahar, pakhavaj and tabla. From here, Baluji went on to graduate from University of Lucknow with a B.A. in Vocal Studies and Sitar. This was shortly followed by a further BA in Tabla and an MA in Sitar from Alahabad University.

Baluji Shrivastav’s compositions feature in a wide spectrum of films, theatre and television including a series of commissioned works such as ‘Portraits of the Dark’, ‘Sitar-Guitar Suites’, ‘Indian in London’ and the world’s only Urdu oration ‘Sohini and Mahival’ which he composed together with Oscar Winner Dario Marianelli. Baluji’s music has featured in Disney’s 2014 ‘Million Dollar Arm”, 20 th Century Fox’s ‘New Girl’ as well as multiple episodes of NBC’s ‘Outsourced’.

In 2008, together with his wife, musician and writer Linda Shanson, Baluji had established the Baluji Music Foundation, a London based charity which recognises and supports blind musicians. The Baluji Music Foundation has the aims of promoting "the understanding and enjoyment of music and performing arts from the Indian Sub-Continent in all its traditional and evolving forms". The Charity particularly welcomes the participation of disabled people in music, and has thus founded the Inner Vision Orchestra of blind and visually impaired musicians.

The Queen’s Birthday Honours List for 2016 recognises the outstanding contributions of individuals across the country’s many communities. Mr Dhanonday Shrivastav is amongst many notable musicians, actors and personalities whose outstanding contributions in the arts and other fields are being recognised this year: including a Knighthood for soon to be Sir Rod Stewart and OBEs to Britain’s most popular TV presenting duo, Ant and Dec (Anthony McPartlin and Declan Donnelly). Downton Abbey actress Penelope Wilton will become a Dame Commander of the Order of the British Empire, while Janet Street-Porter will become a Commander of the Order of the British Empire (CBE). The honours will be awarded later in the year at Buckingham Palace. Please click on this link for a full list of The Prime Minister’s 2016 Honours List released on the occasion of Queen Elizabeth II’s 90th birthday celebrations:

Despite standing outside the conventional establishment of Indian Music, Mr Dhanonday Shrivastav OBE takes his well-deserved and hard-won place amongst the greatest in this field for making a significant impact in contemporary music with jazz, pop and world music.

This press release was written by Angie Lemon: angie@arcmusic.co.uk