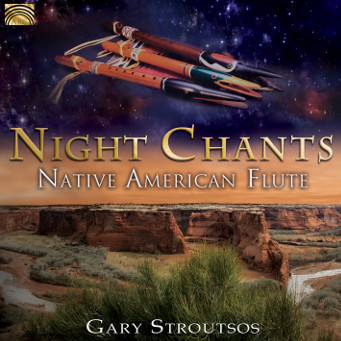 ‘Night Chants – Native American Flute’ is collection of 16 original compositions by multi-instrumentalist Gary Stroutsos expressing the ancient traditions of sacred and secular music, that have been passed down through generations of families and communities. As Gary says in his own words,

“For me it has been an honour to have the opportunity to have studied, recorded, performed with so many diverse Native American people over my lifetime. At this stage of my career it has become a ‘lifeway’ to continue to share in a good way, wherever I am asked, the many time-honoured stories and songs that were so graciously shared with me. It is like a dream any of this ever happened to me but I am glad it did and it makes me smile to keep the music going not for myself but so the music can live on. We make a better world through story and song creative positive bonds.”

Over a career spanning three decades, Gary has brought his unique music and stories to audiences throughout North America, as well as Japan and Korea. He can be heard on the soundtrack of Ken Burns’ PBS documentary Lewis and Clark - The Journey of the Corps of Discovery, which led to a command performance at the White House for President Bill Clinton in 1997. He is also showcased on Jan Nickman’s 2009 film Living Temples, an intimate study of man’s relationship to nature. Gary has been featured on NPR broadcasts, New York Evening at the Pops, and the syndicated radio programme Echoes. His albums Distant Shores, Winds of Honor, The Native Heart, and Echoes of Canyon de Chelly with Navajo Elder Paul Thompson, have all received national acclaim as benchmark recordings of Native American flute music.

In over thirty recordings, including a number of recordings made on location from the plains of the Dakotas, to the canyonlands of the Southwest, to the shores of the Pacific Coast, Gary Stroutsos has created a body of work which expresses a passion for “sound travelling” or music without borders.