4★★★★ Songlines “Yale Strom is one of the most adventurous personalities on the American klezmer scene. He’s not only recorded over a dozen CDs with Hot Pstromi, but made several films and written numerous books, including the excellent Book of Klezmer: The History, the Music, the Folklore.” 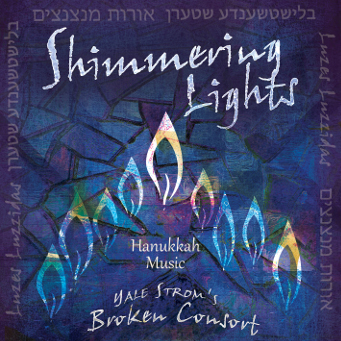 ‘Shimmering Lights’ is the delightful new studio album from ethnomusicologist Yale Strom. This album is a collection of traditional and new songs and instrumentals celebrating the Jewish Festival of Lights known as Hanukkah. ‘Shimmering Lights’ presents a collection of traditional and new Khanike (Hanukkah) songs with musical influences from all over the world; it is a celebration of the many ways this sacred festival is observed by different cultures, performed by a string quartet accompanied by guitar, electric guitar and oud. ‘Shimmering Lights’ is dedicated to the spirit of Hanukkah with songs of family, friends and food, performed with the panache and expert arrangements that Yale Strom always delivers.

The word ‘Hanukkah’ is a Hebrew word meaning ‘rededication’ and is a Jewish holiday of great importance and tradition. Historically, Hanukkah focuses on the rededication of the Temple in Jerusalem, celebrating the victory of the Maccabean Jews over King Antiochus of Syria, 2,500 year ago. Culturally and socially, it is a time when Jewish families come together to celebrate over eight days and nights, as demonstrated on the folk song ‘La Fiesta De La Hanukia’. Hanukkah usually occurs from the end of November to the start of December.

Central to Hanukkah is the lighting up of the sacred candelabra or menorah as the album artwork portrays. As Yale writes, “It is noteworthy to mention that along with the ubiquitous sweets and love the children receive from their parents, the woman of the house is entrusted with the care of the Hanukia, the actual candelabra. Without the ritual of lighting the Hanuka candles, there is no festival”

On the lively traditional dance track ‘Khanike, Oi, Khanike’, Elizabeth Schwartz sings, “Chanukah, oh, Chanukah, come light the menorah / Let’s have a party, we’ll all dance the hora / Gather ‘round the table, give you a treat / Dreydls to play with and latkes to eat / And while we are playing / The candles are burning low / One for each night, they shed a sweet light / To remind us of days long ago…”

One learns much about how hanukkah is observed around the world from the album’s rich liner notes. ‘Kita’l Tas’ explores the custom of Greek Sephardic children going from house to house during Hanukkah singing festive songs while also asking for flour and oil, which they took home to their mothers to cook some holiday foods.

The food eaten during Hanukkah features on ‘Shimmering Lights’ such as burmuelos (muffins) on ‘Azeremos La Merenda’ and ‘Latkes’ (potato pancakes). The folk song ‘Bulbes’ (potatoes) was sung to young Yale by his father and has been re-worked on ‘Shimmering Lights’, Yale keeping the traditional melody but re-working the lyrics. Yale says “… this humorous song about latkes, eating them all eight days of Khanike. Frankly I could eat potato pancakes every day – but by the eighth day, I feel quite done with them (until next year)”.

What is a Broken Consort?

Yale has produced ‘Shimmering Lights’ with world class musicians called ‘Yale Strom’s Broken Consort’. In the 16th and 17th centuries in England, the term ‘musical consort’ referred to both ensemble and performance. A whole consort stayed within the same instrumental family - for example, violin, viola, cello and bass. What, then, is a broken consort? A broken consort is a harmonious ensemble of different kinds of instruments, often including an instrumental family but adding instruments from without. Yale’s ensemble was "broken" by guitar, oud and voice.

Yale’s compositions range from several quartets to a full symphony. His works have been performed by the St. Louis Symphony Orchestra, San Diego Chamber Orchestra, Hausmann Quartet, Burdick-Thorne String Quartet, Rachel Barton Pine, Mike Block, Bordeaux Philharmonic, the Ostrava Philharmonic of the Czech Republic, and others. In addition, he has composed original music for theatre, film and television. Yale’s fifteen albums run the gamut from traditional klezmer to "new" Jewish jazz.  Yale has also directed nine award-winning documentary films and written thirteen books. His latest documentary film is American Socialist: The Life and Times of Eugene Victor Debs. Yale is Professor and Artist-in-Residence in the Jewish Studies Program at San Diego State University, a position created for him in 2006.

Yale Strom explains his vision for ‘Shimmering Lights’: “We wanted the repertoire to present a sense of how Khanike (Hanukkah) was and is celebrated by different cultures around the world… When you listen to these songs, you’ll hear the musicians thinking out loud and sharing their inspiring thoughts and ideas with each other. Each of us has our own personal references, ranging from classical to jazz and blues, to Middle Eastern, klezmer, bluegrass and Texas swing. You’ll hear all of this as we fuse seamlessly with each other.”

‘Shimmering Lights’ was produced by Yale Strom/Elizabeth Schwartz and directed by Yale Strom and arranger, bassist and audio editor, Jeff Pekarek. Playing contrabass at the age of 17, Jeff Pekarek became the youngest contracted member of the San Diego Symphony from 1975-79. He has backed up luminaries such as Benny Goodman, Sarah Vaughan, and Sérgio Mendes. After releasing his first album of originals in 1981, Jeff became a bandleader in his own right, founding and fronting several successful period music and folk music ensembles, including the Jackstraws and the Electrocarpathians. Jeff Pekarek is also the principal arranger for Yale Strom’s films.

Also featuring on ‘Shimmering Lights’ are Alex Greenbaum (cello), rhythms fusion maestro Amos Hoffman (oud, electric guitar) and Dr. David Wallace (viola) described by the New York Times as someone who improvises solos like ‘Jimmy Page fronting Led Zeppelin’. Yale Strom describes his view of what Hanukkah means in his own words, “… freedom of religion and thought and, above all, love and respect for each other. Ultimately, we are members of the same tribe: Humanity”.

‘Shimmering Lights’ will be released internationally through ARC Music on 28 September (5 October for the USA).