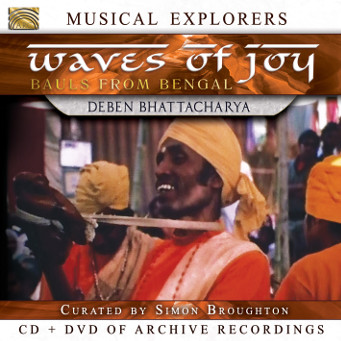 ‘Musical Explorers: Waves of Joy’ is the fifth release in the Musical Explorers series from ARC Music, curated by Simon Broughton, Editor-in-Chief of Songlines Magazine. ‘Musical Explorers’ seeks to document the historic works of musicians and ethnomusicologists who brought attention to the burgeoning world music scene in the 20th century. Deben Bhattacharya built a massive music and film library of priceless archive recordings made during his lifelong commitment to exploring the musical roots of a large variety of cultures.

‘Musical Explorers: Waves of Joy/Bauls from Bengal’ celebrates the poems of both present and past bauls, revered spiritual poets or aesthetes of Bengal. Compositions range from historically celebrated bauls such as Matam Chand Gosain and the prominent philosopher Lalon Shah Fakir through to contemporary bauls such as film actor and folk musician Mujib Pardeshi and lyricist, composer Bhaba Pagla.

This new release comprises both an audio CD plus a DVD of the film made by Deben, called ‘Waves of Joy’, filmed in 1973 at the Kenduli Mela in West Bengal, a huge musical and religious gathering held in Kenduli, birthplace of the famous poet Jaidev in the Birbhum district of West Bengal. The songs on the accompanying CD were recorded in nearby Shantiniketan in 2001, co-curated by Jharna Bose-Bhattacharya.

“Bhattacharya was born into a Bengali family in Benares, India. He came to Britain in 1949, worked for the Post Office and as a porter in John Lewis - and was assigned some programmes on Indian music commissioned by the BBC. He was also lucky enough to be introduced to Harley Usill of Argo Records who’d already released an LP of musicians from Bali recorded at the Winter Garden Theatre in London (demolished in 1965). Bhattacharya wanted ‘ethnic music’, as it was called, for his radio programmes and Usill liked the idea of releasing music from around the world in what became ‘The Living Tradition’ series. Together they released dozens of records and Usill helped him buy his first tape recorder.”

Baul poetry and music are amongst the greatest expressions of Bengali culture. The complete Musical Explorers series released so far includes: Colours of Raga; Krishna in Spring; Music of Tibet; Taiwan Silk & Strings and new release ‘Musical Explorers: Waves of Joy’ being released through ARC Music on the 25th May, 2018.