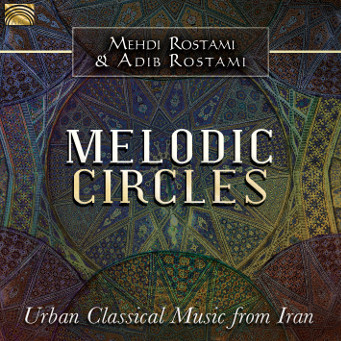 ‘Melodic Circles’ is the new album written and produced by two classically trained Iranian musicians, cousins Mehdi Rostami & Adib Rostami. Both are masters of their instruments: Mehdi plays the Iranian member of the lute family, the setār while Adib accompanies on the tombak goblet drum. The roots of ‘Melodic Circles’ lie in traditional Kurdish music from the Fars Province, widely considered the cultural capital of Iran.

Iranian classical musicians have a two-fold task as they learn their craft: they must learn the old melodies handed down over the generations, called ‘radifs’, and, through the process of skilful improvisations, transform them into something new. Classical Iranian music is built around radifs and hundreds of organised dastgāh (equivalent to scales) to create melodic circles of suspense, interest and mystique. As Adib describes ‘Melodic Circles’ in his own words,

“It was all a journey in a circle of Iranian melodies with a contemporary approach to traditional music… All Iranian melodies are linked together in modal systems, so it is a melodic circle and a collection of melodies.”

‘Melodic Circles’ is built around two urban musical dastgāh, the first is ‘Bayāt-e Tork’ comprising 3 pieces: Nostalgia, Journey and Delight. The second ‘Bayāt-e Esfahān’ includes Lonely, Life, Past and Mystic Dance. ‘Melodic Circles’ showcases the technical and creative powers of two young musicians who have arrived at a high level of mastery, each performance becomes a new musical discovery. As Adib describes in an interview with Mehvish Arshad from London’s Asia House,

“Improvisation is the core essence of Iranian music. It’s called improvisation because on the day of a performance there are always new additions that come to mind. It’s a very long process to be an improviser; you have to practise at home and play traditional materials as well as create your own pieces. When it comes to the concert, 70 per cent of what an improviser plays is what they have already practised at home but depending on the day and the atmosphere, it will change….  Improvisation is at the core of both jazz and Persian music.”

Adib Rostami moved to the UK a few years ago to study Music Industry Management at the University of East London and now performs Iranian music all over London. Adib Rostami’s Reflections of Silence project with Celtic harpist Tara Jaff and table maestro Sirishkumar Manji was selected as one of the Top 10 Live UK events by Songlines magazine after its London debut in 2014. Simon Broughton reviewed Maya Youssef, Adib and Mehdi Rostami in Songlines Magazine,

“At London's Barbican Centre … Maya Youssef played with Iranian duo Adib and Mehdi Rostami in what they call the Awj Trio. Although the Arabic and Persian musical traditions are different, there is much in common in musical modes and improvisation. Flanked on one side by Mehdi Rostami on setar and other by Adib Rostami on tombak, the delicate sounds of two plucked instruments blended seamlessly, revealing the extent of their musical training.”

Performing live under the moniker the Agrin Ensemble, Mehdi Rostami & Adib Rostami have toured throughout their homeland of Iran and beyond to Spain, Bulgaria and the UK where they performed during the BBC Proms season, and the British Council’s UK-Iran season of Culture.

Mehdi and Adib Rostami consider ‘Melodic Circles’ their first official release which is being released internationally through ARC Music on the 27th July.