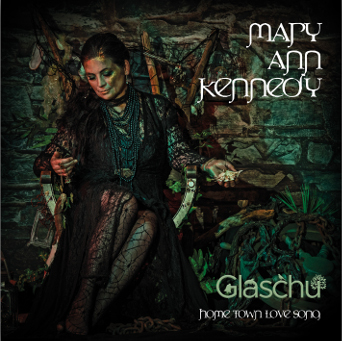 “The ‘Glaschu’ album is a kind of love-song to my home town – these songs are the story of the Gaels in Glasgow before me, but it’s the also the story of every new arrival community in any city the world over – the themes are universal. I grew up in the southside of a city rich in languages and cultures, and as part of Scottish Gaels’ biggest urban diaspora. We realised that, even though Gaelic had been part of Glasgow throughout its 800-year history, we were still very much part of the ebb-and-flow migration that is part of every city’s narrative.”

2019 has begun successfully for Mary Ann, with ‘Glaschu’ being showcased at Scotland’s renowned Celtic Connections festival ahead of the album’s international spring release. Mary Ann performed songs from ‘Glaschu’ in the atmospheric surroundings of the Tron Theatre, at the heart of the city quarter where many of the songs are set. She was joined by long-time collaborator Finlay Wells (Coast) on guitar, and played host to some very special guest singers from Sgoil Ghàidhlig Ghleann Dail, one of the city’s Gaelic schools.

‘Glaschu’ is a tribute to Mary Ann’s city of birth where she was raised speaking Gaelic long before schools like Glendale were established. As with her debut international release, ‘An Dàn - Gaelic Songs for a Modern World’ (ARC Music, 2017), Mary Ann Kennedy continues to give centre-stage to her native language with songs that celebrate the vibrant spirit of the ‘City of Gaels’ or ‘Baile Mòr nan Gàidheal’. ‘Glaschu’ was recorded and co-produced with Mary Ann by her partner and co-director of Watercolour Music studios in Ardgour, Nick Turner.

The song ‘Òran do Ghlaschu’ was the initial inspiration for the making of ‘Glaschu’, and appears on the album featuring a string quartet led by Donald Grant, leader of the Grit Orchestra. Mary Ann came across the ‘Song for Glasgow’, written by Donald MacPherson from Ardnamurchan, whilst in residence at Sabhal Mòr Ostaig, the Gaelic College on Skye. It occurred to her that while Gaels love above all to sing of home, oftentimes an island, her home was the city of Glasgow. As Mary Ann points out,

“A real love-song embraces all sides, the beautiful and the difficult, and this is the song that set me off on a Glasgow album. It’s a universal and timeless experience of urban crisis. You could pretty much take any one of MacPherson’s complaints and apply them to current circumstances - his descriptions of substance and domestic abuse, deprivation versus privilege, over-population, poor public health and on and on, are searing and entirely contemporary.”

Glasgow’s kaleidoscope of life past and present is fully represented on ‘Glaschu’, opening with ‘Camanachd Ghlaschu’, written by Màiri Mhòr nan Òran or ‘Big Mary of the Songs’ as she was  known, a.k.a. poet, land activist and sports fan Mary MacPherson. ‘Camanachd Ghlaschu’ or ‘The Glasgow Shinty’ is the first-ever match commentary in the sport, recounting a New Year game played by Glasgow Camanachd Association in south Glasgow’s Queens Park in 1876. Shinty is a stick-and-ball game played mainly in the Scottish Highlands, and the forerunner to modern-day ice hockey. It takes its name from the Gaelic word, ‘sìnteag’, meaning a leap, and in informal games in years past like this one, could see as many as sixty players on the pitch.

The multi-cultural late-20th century Glaswegian world in which Mary Ann grew up is captured in the poetry of Ruairidh MacThòmais (Derick Thomson), a highly influential writer and scholar who lived much of his life in the city. His portrayals of Glasgow’s streets are read in English and Gaelic by actors Bill Paterson (The Killing Fields; Truly, Madly, Deeply; Outlander) and Wilma Kennedy, Mary Ann’s sister. The poems are set against Nick Turner’s soundscapes created from the urban sounds of Glasgow, from the squeal of underground trains to the roar of an Old Firm football match.

The poems include ‘Orange Parade in Glasgow’, a disquieting acknowledgement of Glasgow’s religious sectarian history, and companion to two of the album’s pivotal tracks. John MacFadyen’s ‘Margadh an t-Salainn’ (The Saltmarket) is a notorious 19th century account of a tribal clash between immigrant Irish families, symbolised on the track by Mary Ann’s vocals battling with the uilleann pipes of Jarlath Henderson. Whether the song represents a community just happy to see other incomers worse off even than themselves or whether there was a deeper antipathy isn’t clear, but Mary Ann refuses to shy away from the darker elements of the Glasgow story. And she offers a gentle but pointed calling to account through Michael Marra’s song ‘Mother Glasgow’, made famous by Glasgow 80s popsters Hue and Cry, and translated for the album by Mary Ann’s mother, Kenna Campbell.

Between 1865 and 1903, steam ferryboats along the River Clyde provided a vital part of connecting the city, south and north. During the latter decades of this era, a fleet of twelve steamers, all called ‘Clutha’ (the river goddess who lends her name to the river) carried passengers on the three-mile journey between Victoria Bridge in the centre of the city out west to the Whiteinch ferry terminal. The ferries were eventually superseded by trams, but in their heyday, they were a great meeting-point, and ‘Òran don Clutha’ (Song for the ‘Clutha’) is another New Year celebration, elevated to the mock-heroic heights of an ocean-going voyage. Mary Ann’s version of the ‘Clutha’ was recorded in Belfast with vaudevillian Americana band, The Wiyos, a Brooklyn, New York trio whom Mary Ann met at Celtic Connections in Glasgow.

‘Oran don Clutha’ was written by Isle of Mull-born railwayman John MacFadyen, a character that Mary Ann gravitated towards during the ‘Glaschu’ project and who features heavily throughout the album. “A trip to the city to see a girlfriend takes the hero past various wonders of the time: the ‘Bonanza’ warehouse on Argyle Street; MacLeod’s waxworks at the Trongate; the horse-drawn Tramway, and the ferries, the ‘Penny Liners’ themselves… MacFadyen was one of ‘the’ voices of the Victorian Gaels, able to hold an audience in the palm of his hand as he summed up the experience of the new Highland arrival with empathy, wit, and sometimes self-deprecation.”

Mary Ann was born in Glasgow into a Gaelic-speaking family. Her mother, Kenna Campbell, belongs to a renowned family of tradition-bearers, the Campbells of Greepe from the Isle of Skye. In 2017, Mary Ann won the MG Alba Scots Trad Music Award for Community Project of the Year with the Tiree Songbook - a performance and album project honouring her father Alasdair’s home Hebridean island of Tiree and its own rich music traditions. Mary Ann was also nominated for Album of the Year for ‘An Dàn’ (ARC Music); Gaelic Singer of The Year; and Trad Music in the Media for ‘Seirm’ - the BBC TV series which Mary Ann presents annually from Celtic Connections.

Mary Ann says the songs on ‘Glaschu’ are “the story of the Glasgow of today and the future… You can take the girl out of Glasgow, but never Glasgow out of the girl. And in the spirit of Gaels’ eternal need to sing about home, this is my Gaelic love-song for the city in all its guises – the voices of arrivals in search of a new life and of those, like me, born and bred there.”

Scottish Gaelic is spoken by close to 60,000 people in Scotland, mainly in the north-west Highlands and Islands and in the country’s urban Central Belt, and with a small but significant diaspora in East Coast Canada. Mary Ann is actively involved in many official and informal roles in promoting the language and its place in 21st century Scotland and beyond.

‘Glaschu’ is a work of love, a chronicle of urban life with 16 tracks researched, arranged and sung by Mary Ann, carrying the words of poets, authors and activists from across Gaelic Scotland. On ‘Glaschu’ Mary Ann lives up to her own words on Gaelic song, “The truest respect one can pay one’s culture and heritage is to make sure it’s a part of a continuum”. ‘Glaschu’ launches internationally through ARC Music on the 26th April 2019.

Reviews for Mary Ann Kennedy’s debut solo album ‘An Dàn’/ARC Music 2017
4 stars **** Songlines “Mary Ann Kennedy is one of the finest interpreters of Gaelic song and an inspiring and vital force on the traditional Scots music scene… an excellent release it is too: self-composed and arranged, it demonstrates Kennedy’s fine talent as a composer, but it’s her vocals that are the real attraction here.”

“The musical arrangements are sensitive and beguiling, with the piano and string quartet accompaniment especially graceful and elegant.” fRoots

“… it is her delivery of the lyrics… that really shine in this collection.” Herald Scotland

“The album is often very beautiful. Mary Ann’s voice is exquisite and Finlay Wells’ guitars add so much – just listen to that sublime lead of ‘Grioglachan’”Folking.com

4 stars **** The Scotsman “This is one from the heart, as the singer and broadcaster performs her engagingly melodic settings of recent Gaelic poetry as well as lyrics of her own – including the opening Seinn, Horo, Seinn, which finely expresses her commitment to Gaelic song as an ongoing culture.”