Album: Sounds Of The East Music from The Balkans, India & The Middle East 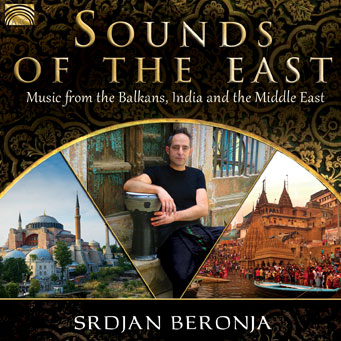 There is no doubt that Serbian composer Srdjan Beronja is amongst a rare breed of contemporary ethnomusicologists who make it their personal mission to travel to remote locations and record unusual local sounds from desert townships, coastal villages and the dawn chorus high up in trees. ‘Sounds Of The East’ contains such unique field recordings original and traditional compositions from the geographical triangle between India, the Middle East and the Balkans. In fact, ‘Sounds Of The East’ follows on effortlessly from ‘Sounds of Varansi’, a collection of field recordings produced by Srdjan Beronja from the holy city of India, released through ARC Music in 2015.

The field recordings on ‘Sounds Of The East’ take some surprising twists and turns. From the opening ‘Alapana’ we are transported to Kerala in Southern India met by a dawn chorus of crows, beeping Indian cuckoos (aka koyals) and a plethora of exotic birds waking up along the Varkala coast.

‘The Cobra’ features a hissing, black Indian cobra and was recorded by Srdjan in the suburbs of the Indian holy town of Pushkar in Rajasthan. Here in the sand and dust, a family of gypsy entertainers live in their simple tents dancing, singing and snake-charming. This track starts with the angry hiss of the black cobra and continues with the loud, hypnotic sound of the ‘pungi’ or double-reeded flute, made from a pumpkin.

Intriguing sounds start ‘Noria of Hama’. On closer inspection one finds these are the creaks and groans of one of the few remaining wooden water wheels turning in the Syrian city of Hama, traditionally used for lifting water into an aqueduct. (‘Noria’ meaning ‘to roar’ or ‘creek’.) Fireworks provide a suitable soundscape in ‘Visphot’, literally translating as Sanskrit for ‘explosion’, with authentic explosions from the holy city of Varanasi (aka Benares) in India, recorded during Diwali, the Festival of Lights.

Srdjan Beronja is well-travelled and also very well-educated. Author of ‘The Art of the Indian Tabla’, he was awarded a diploma in Classical Indian Tabla. Srdjan Beronja studied classical Indian tabla and music in India’s holy city of Varansi at Shivankan Kala Mahavidyalaya . As part of his studies and travels, Srdjan has had the opportunity to meet and collaborate with many masters of traditional instruments, some of whom feature in ‘Sounds Of The East.’

‘Raag Jog Dhun’ is performed by master violinist Pt Sukhdev Prasad Mishra together with Srdjan Beronja on darabuka. Sukhdev Prasad Mishra has ‘pandit’ status as his musical prefix, owing to his outstanding contributions to Indian culture for 25 years plus, as an ambassador of Hindustani (north Indian) classical music of the highest calibre. Pt. Sukhdev Prasad Mishra and Srdjan perform together on three tracks on the album, including #10 ‘Raga Madhuvanti-Charukeshi’ with Srdjan on the large Middle Eastern framed daf drum and #13 ‘Raga Kirvani’ on which Srdjan plays tabla.

One of Serbia’s virtuoso oud and qanun performers, Stefan Sablić, also features on ‘Maqam Ajam Qanun Taqsim’ on qanun, the stringed instrument played solo or as part of an ensemble with its roots from the Middle East to southeastern regions of Europe. There is no doubt that Srdjan Beronja’s keeps excellent company on ‘Sounds Of The East’. Stefan Sablić is leader, composer and arranger of the ensemble “Shira U’tfila”, who preserve and promote the Sephardic musical heritage of the Balkans, the Mediterranean and North Africa. Clarinettist Sinan Aćifović makes a guest performance on the traditional piece ‘SSS Arabesque’.

‘Shepherd’s Love Song’ was recorded live in concert with Srdjan on tabla and Marina Tošić on pan flute. It blends two diverse folk traditions of the Balkans and North India, both historically linked and influenced by the large ruling empires of the Mughals, Ghengis Khan, Persians, Romans and the Ottoman Empire. Fortunately, they are now also linked through the music and work of Srdjan Beronja.

The music on ‘Sounds Of The East’ is full of vitality and authentic musical grit. Expect to be surprised and delighted and you will not be disappointed, for this album is as much an historical record as a cultural pageant through diverse and contrasting countries. Released worldwide on February 24th through ARC Music.