“Well done bagpipe rock is rare. The 5-piece Scottish band Saor Patrol counts among the best representatives of the genre, combining in their unique sound Scottish melodies with Celtic rock.” 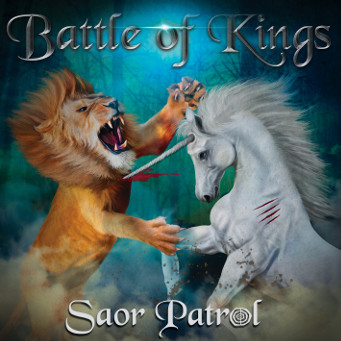 ‘Battle of Kings’ is the mighty new album from Scottish Celtic Rock band, Saor Patrol. It focuses on Scotland’s wars of independence during the reign of Robert the Bruce from 1306-1329 fighting against the English kings, Edward I and later, Edward II. Saor Patrol have written and produced a rousing album that rocks its way through history with driving triple drums, electric guitars and bagpipes.

The scratched unicorn and lion rampant on the cover of ‘Battle of Kings’ are powerful reminders of losses incurred in the historical struggle for Scottish independence. The unicorn traditionally represents Scotland and the lion is a heraldic symbol for England. Robert the Bruce won Scottish independence during his reign but it was a long and bloody battle. King Edward I of England, aka Edward Longshanks because of his height, was at war for most of his reign (1272-1307) with Wales, France and then Scotland.

“The inspiration for this album comes from King Robert the Bruce, his struggle to become king and his fight for freedom for the Scots against the tyranny of the English oppressor Edward Longshanks. Hence the title Battle of Kings!”

Saor Patrol  - pronounced ‘Shore Patrol’ are more than a musical group. The word ‘Saor’ is derived from the Gaelic word ‘saorsa’ meaning freedom. They dedicate energy and commitment to promoting and supporting Scottish culture and heritage through interactive education and entertainment. Saor Patrol are all members of the Clanranald Trust for Scotland, a registered charity that has reconstructed a medieval fortress in the Carron Valley known as Duncarron.

‘Battle of Kings’ is a culmination of their own commitment to Scottish heritage and freedom, a fight that started before Robert the Bruce’s sovereignty, at a time when William Wallace was still  Guardian of Scotland. ‘Stirling Craig’ is about the Craig Abbey in Stirling. Craig is the Scots word meaning ‘steadfast’ and is where William Wallace and the Scots camped before crushing the English at Stirling Bridge in 1297.

‘The Whipping Post’, ‘Bog Trotter‘, ‘Rebels Rising’ and ‘Aftermath’ are stark reminders of the grim reality of war, the battlefield and its ensuing scars. ‘Road to the Isles’ commemorates the time when Robert the Bruce first seized the throne as a fugitive and was offered support and shelter from Christina of the Isles and Aonghus Óg Mac Domhnaill. Aonghus fought alongside Robert at the defining battle against Edward II in the Battle of Bannockburn in 1314. Thence came the Clanranald Clan slogan “My Hope is Constant in Thee”, a statement made by Robert the Bruce to Aonghus on his arrival on the field at Bannockburn. This slogan is actually the Clanranald Clan slogan that stands today.

Most members of Saor Patrol led by Charlie Allan are members of Combat International, a group of select men who are all experts in the field of medieval Scottish fighting techniques and are often hired for their skills for movies. Most of Saor Patrol have now starred in many blockbuster movies to date including ‘Gladiator’, ‘King Arthur’, ‘Robin Hood’, ‘The Eagle’, ‘Thor II’, ‘Transformers 5’ and ‘Macbeth’.

When director David Mackenzie and co-producer Danny McGrath started making the new Netflix movie about the life and times of King Robert the Bruce, it seemed a natural choice to work alongside Charlie Allan. A team of 22 expert fighters from Combat International were selected to work as the personal guard of Robert the Bruce for ‘Outlaw King‘. As Charlie Allan explains, this role was Charlie’s inspiration for the album ‘Battle of Kings’:

“The theme (of the album) itself and the track names were highly influenced by my involvement in the making of the recent movie Outlaw King, whose part was played by Chris Pine. I was personally with ‘Robert the Bruce’ all the way through the movie as one of his band of 22 fighting men. All 22 men were selected from the ranks of The Clanranald Trust for Scotland…”

Robert the Bruce died a hero in June 1329. His body was buried in Dunfermline Abbey, while his heart was interred in Melrose Abbey. The most decisive blow Robert the Bruce struck at the English came on the battlefield of Bannockburn in 1314, defeating the larger English army fighting under the banner of King Edwards II of England. This victory secured Robert the Bruce as a war hero and fighter for Scottish independence. The track ‘Battlefield Blues’ reflects on such brutal conflicts in which the medieval warrior endured the horrors of close-up, armed combat.

The lion and unicorn are historically important symbols for Saor Patrol’s new album ‘Battle of Kings.’ The unicorn is the traditional symbol for strength on Scottish heraldry: a mythical white horse with a single horn that cannot be out-run. The unicorn first appeared in the 12th century on the Scottish royal coat-of-arms of William I, later appearing on gold coins in the 15th century.

When Scotland and England unified under the reign of James VI of Scotland in 1603, the Scottish Royal Arms had two unicorns supporting a shield. When James VI became James I of England and Ireland, he replaced the unicorn on the left of the shield with the national animal of England, the lion, to show that the countries were indeed united.

“This new album, Battle of Kings, falls in line with our continuing efforts to promote our culture and heritage through our live performances. We consider ourselves a heritage band.”

“The Motörhead of Folk”

“Saor Patrol is a remarkable band… the bagpipes rock – raw, rugged and with incredible energy… This is music that brings a daily dose of energy, a daily power boost!”

“Taking their cues from history, location and culture… full of heart, passion and an irresistible beat.”

“Strongly rooted in Scotland's ancient bogs, crags and moors, yet excellently produced with 21st century recording tools and performed by players who, while completely respectful of the form, have 21st century ears... Think “Plaid Sabbath.” There may be no sound more chilling, more stirring, to ears of Western European descent than that of Scottish bagpipes.”

“Celtic rock group Saor Patrol has a unique sound of Scotland in the next century. It brings together the sounds of the past into the present giving an electrifying experience.”

World Music Central USA:
“It isn’t just bagpipes. The percussion is a smooth blend of big-stage rock and military march, abetting the pipes as if one is the carburetor and the other the pistons of an engine fueled by adrenalin, and the rest of the band gets it.”

“When Ridley Scott verbally requests your presence on a movie on more than one occasion people take you seriously. “