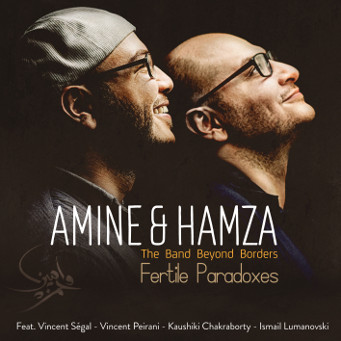 ‘Fertile Paradoxes’ is the new studio album from two Tunisian brothers,  Amine & Hamza M'raihi. Both are masters of the oud and kanun respectively, the two major instruments of Arabic classical music. ‘Fertile Paradoxes’ is steeped in global rhythms spanning from their homeland in Tunisia to Switzerland where Amine and Hamza currently reside, tour and record. ‘Fertile Paradoxes’ is a classy exploration into time-honoured traditions with new dimensions, across eight tracks of carefully selected dynamic collaborations. The album runs close to seventy minutes of airplay; the shortest track is ‘Letter to God’ at 7:31 and the longest being ‘Spleen’ at 10.49

If a ‘paradox’ is a person or thing that combines contradictory features or qualities, then be prepared for some twists and turns on ‘Fertile Paradoxes’. Kanun meets saxophone,cajón meets cello and musical borders are thrown to an adventurous wind: the south Indian kanjira frame drum and percussive Nigerian water jug ‘udu’ blend in with accordion and The Band Beyond Borders are joined by a full chamber orchestra on ‘Spleen’ and the sparky ‘Lullaby for Leo’.

As Amine & Hamza say in their own words: “Fertile Paradoxes is a diary of our past 6 years… beautiful friendships from all over the world, celebrating humanity through music… Fertile Paradoxes is who we are, a blend of breathtaking Swiss landscapes, Polish sweet melancholy and Tunisian street frenzy.”

Even the recording locations of ‘Fertile Paradoxes’ stretch the globe from Poland, Switzerland, France, India to the USA. Amine and Hamza continue to perform in many prestigious scenes all over the world, including the Arab World Institute in Paris, the BBC, the Medina Theatre in Beirut and the Cairo Opera house. From fertile paradoxes, great things grow. ‘Fertile Paradoxes’ is released globally through ARC Music on 31st March 2017.

“Fertile Paradoxes” owns the evident and natural qualities which are the hallmarks of an authentically inspired work. A beautiful success!” – Anouar Brahem