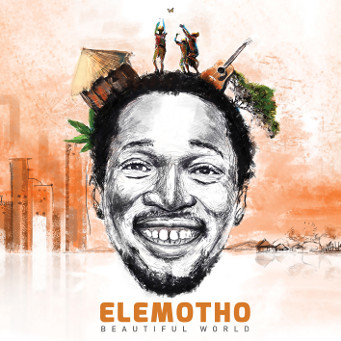 Two musicians sit under the shade of acacia trees with the Namibian sun beating down, blue sky above, the city of Windhoek lies in the far distance. Singer/songwriter Elemotho introduces the title track from his new album ‘Beautiful World’ on YouTube and performs it flawlessly with Samuel Batola (Congo Brazza). This is a warm welcome into Elemotho’s world from the two musicians which provides the musical backbone on the latest Elemotho album, ‘Beautiful World’.

‘Beautiful World’ is the new album from Namibia’s #1 acoustic roots singer/songwriter, Elemotho, an album of optimism and realistic punch and hope for a sinking world. The songs on ‘Beautiful World’ are personal and oftentimes political stories from Elemotho’s world both from Namibia and extensive touring and globetrotting. Namibia, a country of striking contrasts from the cities to The Kalahari Desert, achieved independence from South Africa in 1990. The songs feature traditional and contemporary instruments including congas, mbira (thumb piano), keyboards, acoustic guitar, accordion, violin, the rope-tuned dun-dun drum, cello, saxophone and choral voices. Elemotho sings in English, Setswana and other Namibian languages throughout ‘Beautiful World’ and expresses the importance of story-telling as a songwriter:

“I grew up with storytelling around the fire and that has inspired me to create something that could make you dance as well as listen, smile as well as cry, find peace as well as wisdom.”

‘Beautiful World’ contains two traditional Namibian songs: ‘Sediegi’ – a Setswana word for ‘don’t get side-tracked!’, is Elemotho’s arrangement of a traditional Namibian choral funeral song in which he pays homage to those he has loved and lost. The other traditional Setswana song on the album is ‘Kuruman’, co-arranged with the help of the Makgona Ngwao Cultural Group Choir, known for their commitment to preserving Setswana songs and dance. While Kuruman is a town in South Africa’s Northern Cape Province, it is also a well-known traditional song from Namibia, Botswana and South Africa about the dangers of crossing the Kalahari.

‘Beautiful World’ opens with ‘Ga lo itse’ – ‘We don't know’, a poem written by Elemotho and recited by Naita Hishoono to a backdrop of mbira, acoustic guitar and chanting. The lyrics simply state how we do not know much, we do not ask, yet we assume. Hence our stereotypes, fears and prejudices: “Birds sing and babies cry / And that which separates you and I is a lie / But still after a million sunsets / We shame, blame and then claim the price / Faceless worries and nameless fears.”

The title track ‘Beautiful World’ – sung in both English and Setswana – urges political optimism and change and is, in Elemotho’s own words, “a soundtrack of hope, optimism, freedom and positivity in a world that is slowly leaning towards cynicism and negativity”. ‘Beautiful World’ is dedicated to a new sunrise and is arguably one of Elemotho’s strongest songs to date.

Since winning France’s 2012 RFI France 24 Discoveries Award, Elemotho has carved a successful career for himself in Namibia, Africa and internationally as a musician committed to both personal and political song-writing,

“I see myself as a performing artist and musical activist; I like to throw reality around, thus exploring the depth of the human spirit.”

This is apparent in ‘Black Man’, a provocative, hard-hitting chant in which Elemotho comments on the responsibilities facing his African brothers since Namibian Independence in 1990, to create a future for their families and selves based on respect: “Re latlhegile we… re latlhegile we (we are lost… we are lost)”. The video for ‘Black Man’ published on YouTube was directed by Liberty Lister Verbaan, recent recipient of ‘Best Director’ 2017 from Namibian Theatre & Film Awards.

‘Beggars & Superstars’ touches on mortality “because no matter who you are, a beggar or a superstar, we are all here today and then gone tomorrow”. A large part of Elemotho’s own beautiful world is his family; ‘Pau’ is dedicated to Elemotho’s son and features Samuel Batola singing a Central African ode to peace in Lingala.

Elemotho’s live performances include BBC 3’s Charlie Gillett Stage at WOMAD 2014, festivals throughout Africa including Durban’s Awesome Africa and Zanibar’s ‘Sauti Ya Busara’ festivals and multiple tours in Africa and Germany. In 2016 Elemotho and his long-time collaborator Samuel Batola presented their Afro-Acoustic Experience on a two-month tour across Germany, performing at festivals such as Berlin’s ‘Ke Nako Afrika Festival’.

Elemotho – whose real name is Gaalelekwe Richardo Mosimane – has recently been awarded with The Lifetime Achievement Award from NAMA – The Namibia Annual Music Awards 2017. In November 2016, Elemotho was awarded the ‘Namibian Tourism Personality of the Year’. Two songs from Elemotho’s ‘My Africa’ album (ARC Music, 2014) – ‘Neo’ and ‘La Vida’ – recently featured on the Netflix series ‘Grace and Frankie’. ‘Elemotho’ as a name means ‘that which cannot be chased away’. ‘Beautiful World’ will be released globally through ARC Music on June 23rd, 2017.