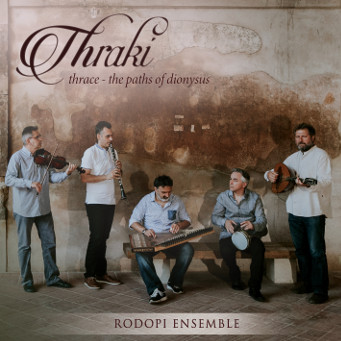 Rodopi’s sound is characterised by Yorgos Pagozidis’s healthy use of traditional percussion including the darabukka; dumbelek and def, two framed drums; the ‘tambourine’ riqq and North African bendir as well as finger cymbals. ‘Thraki’ joyfully honours and celebrates Thracian dance and folk songs.

Rodopi Ensemble is deeply connected to Thrace, a unique geographical and historical triangle in southeast Europe comprised of south Bulgaria, northwest Turkey and the north-eastern tip of Greece. Rodopi Ensemble’s name is directly inspired by the Thracian mountain range of Rodopi that runs for 240 km. Visitors to the Rodopi mountains enjoy the region’s abundant rivers, waterfalls and stunning scenery, while few may know the cultural significance of these rolling peaks.

According to Thracian mythology, Queen Rhodope of Thrace offended the gods and, along with her husband, King Haemus of Thrace, was turned into mountains by Zeus and Hera as a punishment. Thus the Rodopi mountains were formed, providing a geographical link across Thrace.

The town of Komotini is the capital of the Rodopi region and holds special value for the group. Komotini was the home town of Rodopi Ensemble’s late clarinettist, Sol Hasan. ‘Roman Havasi’ (The Air of Gypsies) deserves special mention as the ensemble’s tribute to Sol, whose unique flavours and talents as a musician and ensemble member are greatly missed. Nikos Angousis now replaces Sol Hasan on clarinet.

Says Drosos Koutsokostas of the making of ‘Thraki’: “As one of the longest-running music groups in the area, we are proud to present Thracian music that we inherited from our parents, grandparents and those that came before them… The idioms and nuances of Thracian music derive from the harmonious coexistence of people from different cultures; people who use music and singing to come together as one…”

The instrumental ‘Synkathistos’ is a great dance that opens ‘Thraki’, a tune most often played to accompany brides and grooms from their homes to the church. ‘Tsakitzis’ is a free-form dance well-known and loved by the working folk of Thrace, sung in Greek and Turkish, as both people have their own versions.

‘Margoudi’ is a typical Thracian tune which is danced holding scarves in both hands. It is a free contra dance of the streets. Its lyrics refer to a young woman’s persistence in love despite her parents’ objections and expresses strength and freedom, valued in Thrace.

‘Thraki’ includes the lively, popular ‘Baidouska dance; typically performed in a circle in which dancers switch directions by uniformly moving their hands. This specific instrumental melody is one of the most popular among entertainers.

Thrace holds a special place in ancient mythology as the liner notes outline, “This border land was considered as the gateway of Dionysus and ‘home of music’.” With ‘Thraki’, the Rodopi Ensemble ensure this gateway will remain open for many years to come.

‘Thraki’ is 100% pure Thracian music and is being released internationally through ARC Music on January 25th, 2019.