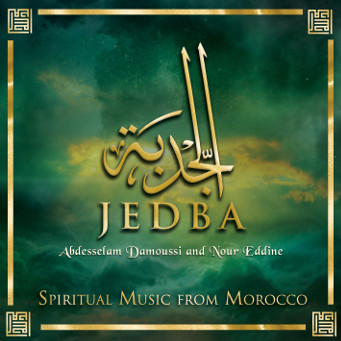 Jedba shows that sufi music is not confined to mosques or zawiya (monasteries) but is an intrinsic part of everyday Moroccan life. It is music from the streets, homes, marketplace and desert. Profound, mystical, compelling, entrancing… the entire album is a journey through the heart and soul of Marrakesh. It pays homage to the spiritual music and songs of urban and rural Morocco.

Authentic mystical sufi chants with real depth, at times extended into trance-like repetition through the careful and skillful arrangements of co-producers Abdesselam Damoussi and Nour Eddine. Jedba includes performances by singers and musicians as heard on the streets, in a Tangiers mosque, and features a sufi master musician from the Atlas Mountains. The resultant music is as varied as the landscapes from whence it comes, yet always remaining true to its origins.

The journey of Jedba started inside the old, walled marketplace of Jemaa el-Fnaa, in the heart of Marrakech. Jemaa el-Fnaa is a UNESCO Representative List of the Intangible Cultural Heritage site, a bustling haven for poets, musicians and storytellers alike. A marketplace where public expressions of sacred traditions is both normal, expected and cultivated. In Jemaa el-Fnaa, Moroccan sufi mystics, poets and musicians gather to share and air their words and wisdom.

One day, as Abel Damoussi ventured through Jemaa el-Fnaa, he was immediately struck by two groups of mystics – Jilalia and Issawa – playing distinct and unexpected combinations of music: a crossing over of the double-reeded rhaita with flute and percussion, all performed in perfect time. Abel could have walked by, but the music producer in him took charge. Abel invited the mystics for a mint tea, and afterwards to Marrakech’s Agafay Studio, where the opening track Jedba was laid down in layers.

As Abel says, “This album is inspired by Moroccan Sufi music and chanting which is part of everyday life of most households in Morocco… Sufi music is played in all celebrations, be it birth… weddings or religious feasts…”

The word Jedba is a collective dance in which people, be they Jewish, Christian or Muslim, hold hands in a symbol of harmony and friendship - united in love of the Divine.

Both unknown and known singers feature on Jedba. ‘Sabaato Rijal’ (Seven Saints of Marrakech) features a beggar who was praying in Jemaa el-Fnaa and was recorded that same day (having been fed and well paid for his art!). The voice of an 8-year-old singer, Nour Nejma Damoussi, Abel’s daughter, can be heard at the start of ‘Spiritual Mawal’ (The Light of the Star). During one recording session, Nour starting singing a spontaneous “Allah, Allah, Allah” to the bass line she was listening to and the sound engineer pressed record.

Moroccan Saharan ‘diva of desert music’, as Abel calls Yemdeh Selem, performs on the wonderful track ‘Arrahmane’ (Spiritual Desert Voice from the Moroccan Sahara). Yemdeh was born into a sufi family and to date she has 30 years’ experience of this art that she promotes all over the world. Selem’s voice is often compared to that of Dimi Mint Ana, one of Mauritania’s most famous musicians.

The magic of musicianship as performed in Jemaa el-Fnaa continues well into the night as featured on ‘Tazalit’ (Spiritual Berber Voice from the Atlas Mountains) on which master Berber musician Raiss Brahim sings and performs ribab and banjo accompanied by Nour Eddine on percussion. On a night wander through Jemaa el-Fnaa, Abel came across Raiss and invited him to perform on Jedba.

As Abel says of Nour Eddine, “The magic of my friend and co-producer Nour Eddine was omnipresent throughout, with his great percussion and construction of original grooves…”

Nour Eddine performs percussion and outar on many of the tracks on Jedba and insists that ‘Lailaha Illa Allah’ (One God) is his favourite song, as a hymn of the north Moroccan town of his birthplace, Ouzzane. Ouzzane is widely celebrated as a holy city of Sufism. Nour Eddine’s work has stretched from Ouzzane to Europe where he has performed with the Royal Philharmonic Orchestra in Westminster Abbey.

Jedba is a window into the musical myriad of Marrakesh and Jemaa el-Fnaa, a place like no other on earth.

The album releases worldwide through ARC Music on January 25, 2019.