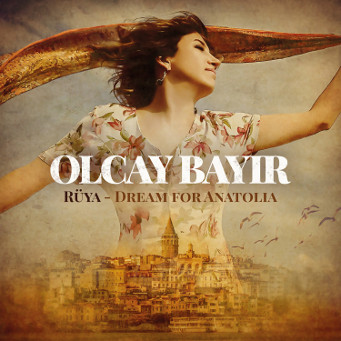 Olcay Bayır’s music is a natural marriage of her time-honoured Anatolian heritage and the vibrant, eclectic sounds of London, which she now calls home.

Classically trained as a soprano, collaborations with musicians from all around the world have informed Olcay’s music as much as the rich tradition of Kurdish and Turkish folk songs of her youth. This album, arranged and produced by Al MacSween and Giuliano Modarelli, exemplifies this and bears the musical stamp of their world-jazz collective Kefaya – a lilting west African feel somehow sits comfortably with Kurdish song Ferzê, and the traditional Cypriot dance song Dolama is restructured with a catchy melodic hook and a groove that builds to an ecstatic climax. Olcay (pronounced ‘OL-djai’) prefers to think of herself as a citizen of the world, an identity carved moving from place to place, absorbing cultural influences along the way.

Of course, music is in Olcay’s blood. Her father was an ashik, a musical bard of the Anatolian region and purveyor of oral culture. In the Alevi tradition, the ashik accompanies religious and social ceremonies, providing song as the basis for worship and community. Her father occupying such a role had a profound influence on Olcay’s formative years (she started composing at the age of six), and helped instil in her the love of music that guides her today.

Born in Gaziantep in the south of Turkey – the geographical and cultural counterpart to Aleppo across the Syrian border – Olcay’s childhood was characterized by transition. Moving every few years to different areas of Anatolia gave the young Olcay an insight into the diverse cultural and religious approaches of the region, and what it means to be Anatolian: “I believe that culture – more than religion or nationality – provides identity. I’d rather talk about traditions and regions, rather than specific religions and nations. You are you, whatever religion or country you’re from.”

At the age of sixteen, Olcay and her family moved to London, an experience she credits as forming the cornerstone of her musical identity. It was a time of intense vulnerability for Olcay. Not knowing the language rendered her practically mute; for some time, music was the manner by which Olcay could best interact with the new world around her.

Through her studies and collaborations in music, Olcay found her voice. Her debut album ‘Neva / Harmony’ (Riverboat Records, 2014) was a collection of Anatolian folk songs in her own arrangements, in which she sings in five languages. “Olcay Bayir is an impressive newcomer to London’s vibrant global music scene… this is an elegant and often gently exquisite set”, commented the Guardian.

The new album – Rüya – showcases Olcay’s own compositions for the first time. Rüya – the poignantly hopeful title track meaning ‘dream’ – speaks of Olcay’s dream for a better world, and, fittingly, came to her while she slept. Olcay says she became a child again in that moment, innocently putting forth her wish for love and peace in the world.

Love, in all its forms, is a prevailing theme throughout Olcay’s music, such as in the track Arı Oldum (“I Became a Bee”). You cannot separate bees and honey, and this is referenced in Alevi and Sufi tradition. Things don’t work when they are apart. Together they form something that is so beautiful in its necessary bond. Love – romantic or platonic – provides a path to a love on a higher plane: a love divine.

The album Rüya is the next step on a journey that began in one of the oldest continuously inhabited cities in the world, over 3,000 kilometres from cosmopolitan London. To paraphrase the opening song Uzun İnce Bir Yoldayım, an excerpt from Âşık Veysel Şatıroğlu, one of Anatolia’s most revered ashiks: “I am on a long road, between two doors. I walk all day, I walk all night”. A reference to the Alevi metaphor for life, from birth to afterlife, the parallels with Olcay’s journey are clear.

“a real treat for the ears” Rootsworld;
“enchanting” Inside World Music;
“exquisite” The Guardian.