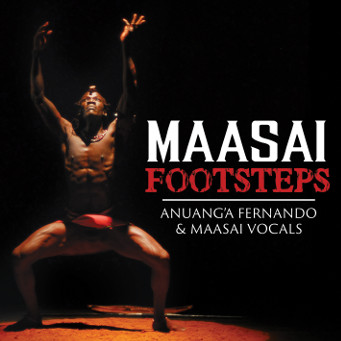 “Tradition is what makes people who they are",says Anuang’a Fernando, creator of Maasai Footsteps. "If you lose it, you lose your identity”.

The project celebrates the ancestral songs and dance of the Maasai people of East Africa, performed at schools and on European stage through contemporary dance. While capturing and honouring the aesthetic and culture of the Maasai nomadic tribes Purko, Loodokilani and Kisonko, Anuang’a uses his passion for contemporary dance style - learned in Paris, France - to share his heritage and make it accessible to modern-day students.

Through chants, whistling, group song and instrumentation, a story unfolds. We begin with a song used by the Purko clan to relax the cattle while they graze, followed by Emburkoi, voiced in chorus by the Loodokilani warriors to give them courage while hunting.

We hear a wise elder sing to the younger generation of females about the importance of Maasai tradition, and a praying song to the god Enkai, sung by the Purko clan. Meanwhile, Enkairishi is heard as the warriors return home from the hunt and endeavor to protect the community with the use of gathered herbal medicine. Oleng'wesi is an educational song about protecting yourself from wild animals and how to use a shield effectively.

For Anuang’a, interest in Maasai dance began with the music and dance festivals held in his local villages, Kitengela and Magadi. After debuting in 1990 with the famous Rarewatts dancers, he worked with African Heritage in Kenya and abroad. He explored every avenue which dance could take him, and soon found himself in Asia, Europe, and particularly Paris, where he developed his own style of contemporary dance at the masterclasses of Carolyn Carlson. Today, he enjoys recognition through the likes of Africa Connections, who selected him as their featured artist for Black History Month, October 2020 - “Grace personified”.

The nineteen tracks on this album are thoughtful, sentimental, encouraging and speak to a historical beauty captured here in song and dance. Life, and the victory of unity is celebrated. The album includes an exclusive video of the staged dance performance filmed by Joshua Nteng'a, featuring 45 Maasai dancers from the three clans. The vibrant performance is sensational to watch, with natural harmony of song and movement. The jumping, for which the Maasai are famous, is something to behold. “A performance you won’t want to miss.” – Business Daily Africa

Maasai Footsteps reveals the evolution of the Maasai culture and shows the value of their traditions in the world today.