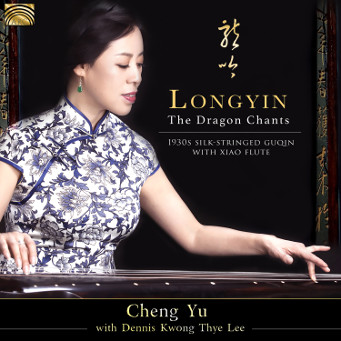 Like its namesake - the eponymous main instrument - this is an album rich in history and cultural tradition. Performed exclusively on the guqin and the xiao flute, these ancient Chinese instruments are the perfect pairing to bring to life ancient sounds of some of the world's oldest written music. A collection of pieces that span hundreds of years, each has its own story to tell. These tales are beautifully conveyed through the harmonic artistry of the two performers and their innate connection to their respective instruments. Many of the album's songs tell historical stories of folklore or fact, and often both. Others depict a time, or a place, immortalised in the writings and performances of this magical music.

The seven-stringed guqin – which translates literally as ancient zither – is a quiet instrument, considered one of great subtlety and refinement. Traditionally played solo due to its delicate sound, it does, however, thrive when accompanied by the gentle tones of the xiao flute. The result is a soothing and tranquil sound that demands contemplation. Whether in harmony or playing different parts of a melody, each compliments the other to produce a perfect musical marriage.

The guqin played on the album Longyin – meaning The Dragon Chants – was named by a previous owner and legendary sinologist Robert Hans Van Gulik and has passed on through the years, eventually finding an ideal partner in Cheng Yu. With clear reverence for an instrument so steeped in history, she thought its name a perfect title for a collection that celebrates her homeland's culture and musical traditions. Longyin is played with original 1930s Chinese silk strings to produce a warmer, gentler sound. The vertically played xiao is an ancient flute made traditionally from bamboo. Deeply immersed in Chinese mythology and positive symbolism, the Xiao is more than a simple instrument. It is an ancient cultural artefact and an important part of China's incredible heritage.

Cheng Yu is a guqin virtuoso, having played since her youth. A consummate and passionate professional, her achievements are too numerous to list in full. Career highlights include rebuilding and playing the five-stringed pipa – an ancient instrument lost since the 8th century, and multiple cross-cultural collaborations with musicians such as popstar Damon Albarn, cellist Matthew Barley and pianist Lang Lang, to name just a few. A founder of several musical institutions, she has dedicated her life to performing and studying music.

Dennis Kwong Thye Lee has been playing various Chinese instruments since his early teens. Dennis has taught and performed professionally for over 40 years, specialising in traditional and crossover pieces with the xiao flute. Both performers being based in London allowed for the rare opportunity for a unique collaboration, and Longyin - The Dragon Chants showcases two artists at the very peak of their powers.