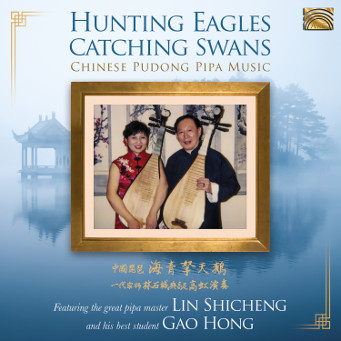 Hunting Eagles Catching Swans is a historical, honorary album of one of the greatest pipa masters of all time: Lin Shicheng.
Lin is often referred to as the Ravi Shankar of the pipa, first for his unprecedented skill on the instrument and second for his years of profound contribution to the artform in teaching many of the prominent pipa players in the world today.

Gao Hong is a prolific teacher, writer, professor and master of the pipa. She was a pupil of Lin Shicheng’s while at the Central Conservatory of Music in Beijing, and is now an award-winning and internationally-recognized musician. Together, they perform an enchanting collection of traditional Chinese music.

The album starts with their rendition of Three Six - one of the most famous melodies in the Jiangnan sizhu (Jiangnan silk and bamboo) repertoire. With a driven pace and lively energy, it reflects the spirit of hardworking rural Chinese men and women as they wish for a better life. Autumn Thoughts, in contrast, is a gentle and reflective piece. It uses low notes and intricate left-hand technique to depict a quiet Autumn evening.

Liberating bounds of energy are heard on Wild Geese Alighting the Sandy Beach, using unusual pipa techniques to portray flocks of migrating geese in their natural habitat. We hear them circling high in the sky, landing on a sandy beach, conversing, playing in the sand and returning to flight.

Further masterful simulations of nature can be heard on the title track Hunting Eagles Catching Swans, which is a military-style work and the oldest surviving written piece for the pipa. It is from the Yuan Dynasty, when workers trained eagles to hunt swans so they could retrieve pearls from their stomachs and use their meat for food. A rare and difficult pipa technique is used to depict the hunt: four strings are grabbed in a half second and bent ferociously. This technique is usually avoided or faked by other performers. Lin Shicheng was one of the few players who could execute it correctly.

This album is all the more valuable in that it was recorded in the decade before Lin passed in 2005, and is some of the last music he played. The opportunity to share those moments in duet was an absolute honour for Gao Hong, especially as Lin Shicheng had previously never toured in duet with another pupil other than his son. With evident enthusiasm, the duo explores a wide range of moods and textures using sparklingly divine technique; Chinese festivals, operas, tales of warlords in battle, animals in hunt and famous classical repertoire is played.

The final track, Moonlight over the Spring River, was until now unavailable to the public. Kept in treasured archives, their performance of the delicately tranquil Wen-style pipa piece is lovingly presented for the first time for all to enjoy. The is one of the most well-known compositions in Chinese classical repertoire.