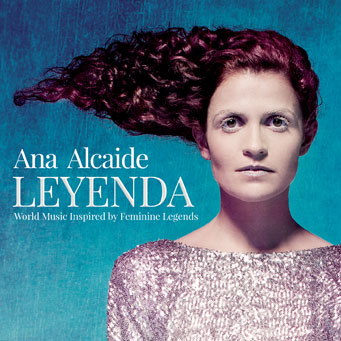 Leyenda is a magical journey into the world of feminine legends by world music singer and composer, Ana Alcaide. This all-new studio album contains 12 songs, each creating a unique world, yet perfectly matched as a collection. From the designer artwork to the beautifully orchestrated music, Leyenda is tour de feminine force from an exceptionally talented composer and singer and Top 20 WMCE Charts artist.

The journey of Leyenda starts with ‘Tlalli’ , an instrumental tribute to Mother Earth and her lifecycles featuring Ana’s folk instrument of choice, the Swedish nyckelharpa; two voices; a haunting wooden flute and bird effects. ‘Tlalli’ – the old native Mexican word for ‘Earth’ is a mesmeric album opener, with poetry conceived by Beatriz Moreno-Cervera.

Drums and accordion drive us on from the seed planted in ‘Tlalli’ to the ancient Chinese mythsurrounding Diosa Luolaien, the goddess Luolaien. This song is a metaphor for the end of matriarchy. Legend has it that Luolaien had the magical power of flight, until her fiancé cast a spell to restrict her movements and confine her to a domestic life.

All aspects of femininity are expressed in Leyenda, from all-powerful flying goddesses to tempting water sirens and magical creatures lurking deep in caves, Leyenda is an intriguing and magical journey into the psyche of womankind, both the good and wicked, the light and the dark. As Ana says in her own words:

“Leyenda is a very personal album inspired by legends and mythologies of women and feminine beings from Spain, Europe, and diverse places from around the world. To help me explore and understand the darkness that lives in all human beings, I wanted to discover the ancient world of the feminine that has been passed down through the generations but we have lost touch with. They are women who live between worlds, weird and misfit feminine beings. The idea is to give a modern image of this magic world, avoiding the classical ‘fairy tale’ look ”

Spanish legends and myths also feature on Leyenda such as in the track La ondina de Vacares, setdeep in the heart of Grenada’s Lake Vacares, home to the wicked yet magical water spirits or ‘undines’ who reside in forest pools and waterfalls. These sirens adopt the form of birds to attract unsuspecting travellers and, using words of love, lure them into water where they will be dragged down to the murky depths and devoured. Ana Alcaide casts her spell wide and far with an almost bewitching musical journey as she says in her own words:

“ Leyenda is a tribute to all women and to the feminine side, because our lives are reflected in those

of the protagonists and, through that, we become part of the legend ourselves. I invite you to go through that mirror daring to feel their stories; after all, their light and darkness are ours too. Their strength and power reflect aspects of the feminine essence as an extension of nature, across the spectrum of light and shadow.”

La Mujer Mueria (Dead Woman) is a pinnacle track on the album leading into the myth surrounding the Spanish mountain chain located in Guadarrama, Segovia. Legend has it that the beautiful Blanca was accidentally killed in a sword fight between two brothers who both sought her love and after she fell, her body became the mountain and grew into the entire range over time.

From the opening notes of Leyenda , to the joyous celebration of spring as on the track Folía de la primavera, to the capacity of darkness as on the glorious La ondina de Vacares, Leyenda charms the listener as Ana Alcaide explores and poses this leading question: ‘what is a legend?’ and answers,‘the ethereal edge that separates illusion from reality’, a definition that is masterfully realised throughout the album. The album’s title track, also called Leyenda, a perfect example of the sense of other-worldliness which rings throughout Leyenda replete with Ana’s transcendent vocals soaring above the haunting sounds of the psalterium, whistles, drums and keyboards.

Ana Alcaide draws on powerful feminine myths that have reached her in some way,

“They are brave, strange women, otherworldly beings who have transcended their nature in animmense act of love, according to their understanding. Women who burn bridges, are killed in fights, devour men, cut their wings or shed their skin. Stories of love and hate, kindness, sacrifice, obsessions and desires, reflecting timeless human passions.”

Ana Alcaide burst onto the international world music scene with La Cantiga del Fuego – released in 2012 – which charted for 5 months in World Music Charts Europe. Leyenda, the spellbinding new album from Ana, is arguably her greatest work to date. Released worldwide through ARC Music on the 24th June, 2016.

Lyrics for all tracks written by Ana Alcaide except 1, 6 and 11 written by Beatriz Moreno-Cervera.