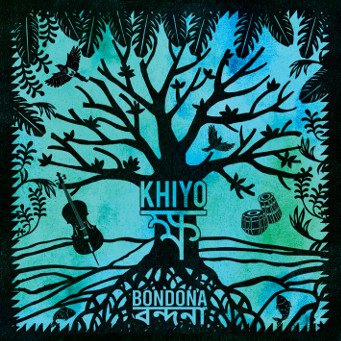 Khiyo is a London-based, British-Bangladeshi group formed in 2007. Bassist Ben Heartland joins the co-founders, singer Sohini Alam and multi-instrumentalist Oliver Weeks, as the nucleus of this innovative and inventive ensemble.

For Bondona, they and their collective sound are enhanced by the welcome addition of Hassan ‘Moyo’ Mohyeddin on tabla, David Ingamells on drums and Flora Curzon on violin. This growth could be seen as apt development, for evolution is a theme at the very core of Khiyo’s musical ethos. While the band’s roots are deeply interred in Bengali culture and traditions, considering the group’s diverse makeup, it seems natural that they display a bold infusion of influences in their work.

Lead Sohini Alam inhabits a somewhat divergent dimension as a child of two cultures. She was born in the UK and bonded to Bangladesh, her parents’ homeland. As a third-generation vocalist, she comes from a family with a deep musical heritage. A renowned international performer, she has worked on music for dance, film and theatre whilst also lending her considerable talents to other bands and projects. Having spent much of her youth in Bangladesh, her reverence for honouring the traditions of Bengali music is innate.

While blessed to enjoy the richness of both cultures, for her and undoubtedly others like her, there is the sense that neither fully represents them. Oliver Weeks’s first exposure to Bangladeshi culture came through a school trip to Calcutta. Having earned a PhD in composition from the Royal Academy of Music, his interest in all things Bengali grew alongside his considerable recognition across the musical world. A prolific composer, he has scored film soundtracks and worked with notable artists such as Elton John, Pixie Lott and Chas & Dave, to name just a few. His works have been performed by the London Philharmonic Orchestra, the BBC Singers and the Mercury Quartet, amongst others.

Upon meeting, Alam and Weeks discovered a natural connection, and, with Oliver bringing in Ben Heartland and his substantial musical knowledge and repertoire, Khiyo was born. An organic beginning and a trait that would carry over to their recording process. Genuinely collaborative jam sessions form the bulk of the creative method, always aiming for a ‘live sound’ and then adjustments are made to ensure only the highest musical standards. Something that the band are united on. Although, in testament to their intuitive approach, it is not uncommon for happy mistakes to make the final cut.

Bondona means to pay tribute or homage to, and Khiyo goes to great lengths to ensure that Bengali musical conventions are honoured whilst adding their own experiences and influences to create something new, something fresh, something eminently exciting. Bondona is a collection of original compositions and interpretations of established Bangladeshi songs.

Although the traditional music is fully respected on the album, it may be the global musical flavours entwined with the original Bengali beats that make Khiyo so distinctive and of broad appeal. The blending of Western rock, jazz, and folk, with Indian classical, Bengali folk and Nazrul Sangeet creates an intoxicating cross-cultural cocktail. True to the tenets of Bengali culture, the songs of Bondona explore what it is to be human. Stories of contemplation, celebration, deep emotion, the darkness we face, the beauty of the natural world, the cultures it cultivates, and the human spirit’s resilience and determination.

With Bondona, the band has chartered the music’s evolution, interweaving sounds of modern London and the broader world with the unmistakable traditional tunes of Bangladesh.

As Sohini says,‘The music represents Khiyo’s culture. We honour tradition but add us to the legacy.’

Through Khiyo, she and her bandmates can represent and celebrate their unique lifestyles. Their culture – their multi-culture.

The combined talents of Khiyo have created a listening experience that honours Bengali culture and tradition and draws on various influences from London’s musical macrocosm to produce a unique expression of their distinct multi-cultural adventure through life. A new interpretation, a fresh voice is reaching out to a new generation, a new audience. A voice that represents them.