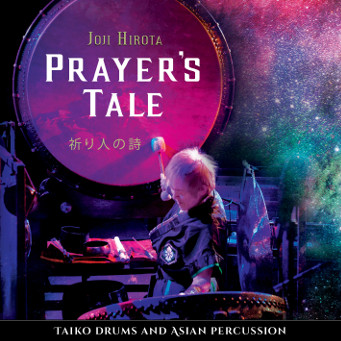 Arguably Japan’s pre-eminent multi-percussionist, Joji Hirota has been dazzling audiences for nearly fifty years. With his latest offering, he continues to amaze, inspire, and push the boundaries of solo performance with precision and poise that few could even attempt to replicate.

The Album: To Hirota, the inspiration for ‘Prayer’s Tale’ was not hard to find – for it is everywhere. The seven pieces that comprise the album explore the grand themes of nature, the cosmos, and humanity itself. While these concepts are monumental in scope and could be viewed as daunting, Joji reassures us that these are easily accessible to everyone, for everyone has their own sense of the universe, circumstances, and unique philosophy on life. ‘Prayer’s Tale’ is Joji’s invitation to share his outlook with the world through his talent for creating musical pictures, painting colours, and eliciting emotions via the nuances of sound and performance.

The music inside Joji Hirota is a powerful element, and his unique, circular setup of instruments allows him to harness this energy and express it in a highly effective, emotive manner. The array consists of various taiko drums, different sizes of kin (prayer bells), a range of gongs and clusters of bells and chimes. Incredibly, this is not even the upper limit of his talent, as Joji is recognised as one of the globe’s premier shakuhachi flautists. Having fine-tuned his arrangement over the years, Joji has created a unique and intuitive performance style, often adding primal vocals that allow him to share his very core as a performer. That one man can fashion a sound comparable to an orchestra in impact and clarity is a testament to this unique artist’s skill and dedication to his craft.

The Artist: Joji Hirota is a composer and orchestrator, multi-percussionist, taiko drummer, shakuhachi flautist and singer. He has worked with innumerable respected names across the art and music world, including WOMAD, the Japanese Theatre Company and the Royal Shakespeare Company, to name just a few. He continues to innovate and entertain, and for this, he is eternally grateful.

In his own words: ‘It has been granted to me to express my own being’s core foundation through this album and save it forever, for which I feel very fortunate. I would like to express my happiness and give my deepest thanks for having been given this opportunity.’

“Joji Hirota sets the scene for a world caught between two divides – people and gods, the sacred and the every-day, the old and new.” – Japan Society