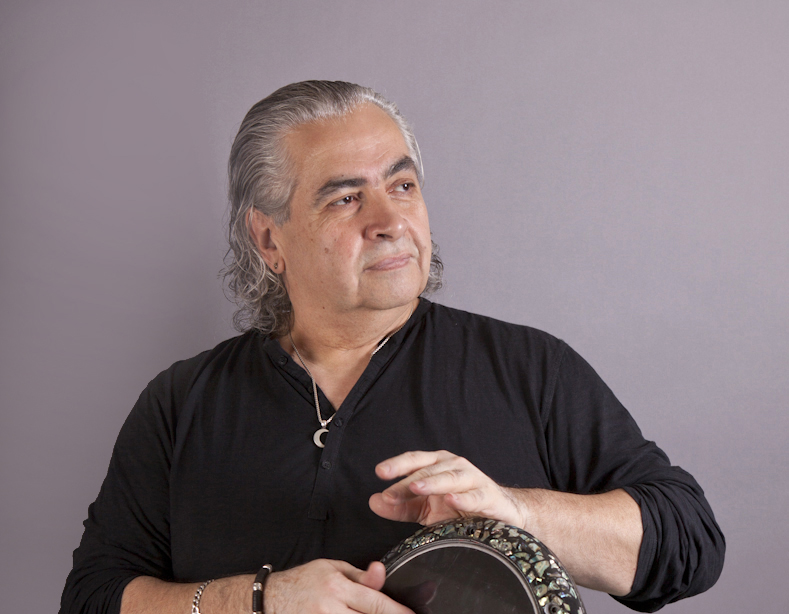 Hossam was undergoing treatment for a heart condition in Brazil, however the condition was very advanced. Always a man of unwavering spirituality, Hossam passed on to begin the next phase in his spiritual journey.

Among his crowning achievements are his loving family, a vast legacy of musical creativity and knowledge, and his philosophies of Egyptian dance and rhythm that he exported to the world.

Known as Egypt’s Ambassador of Rhythm, his goal of injecting Egyptian rhythms into public consciousness led him to arrange music for (among others) Jimmy Page & Robert Plant (Led Zeppelin), Shakira, Ricky Martin and A.R. Rahman, feature on recordings by Peter Gabriel and Jay-Z, and compose music for numerous films.

Over the last three decades, Hossam travelled the world, educating in the art of true Egyptian dance. His philosophies of dance and rhythm helped tens-of-thousands of dancers and percussionists perfect their crafts. During this time, he somehow found the time to release some thirty albums of Egyptian dance and world music, and produce countless more for artists from all around the world.

Those who knew Hossam will cherish his kindness, his passion, spirituality, wit, and steadfast dedication to his art.

Please join Hossam’s family in celebrating his life and legacy, and wishing him well.

HOSSAM RAMZY, Egypt’s Ambassador of Rhythm, was born in Cairo. His musical career began early, when at the age of three he was given his first drum – an Egyptian tabla. His passion for percussion was noted by his family (many of whom were themselves involved in the arts), who encouraged him to master his craft by studying with the leading music teachers of Egypt. A move to Saudi Arabia introduced Hossam to many of the Bedouin tribes who gave the young Hossam a rich insight into the cultural origins of Middle Eastern music that became the inspiration for many of his later rhythmic directions.

In the mid-1970s he moved to England, and enjoyed great success as a jazz and Latin style drummer working with many highly respected jazz musicians like Andy Sheppard and Geoff Williams. But, as he began looking for new dimensions of percussive sounds, he found himself turning full circle, back to his first love, the Egyptian drums, and the thrilling dance rhythms of the Middle East. The distinctive sound of Hossam’s percussion and the exciting rhythms on his albums caught the imagination of Peter Gabriel who invited Hossam to perform on his albums Passion and later Us. Hossam went on to work with many top musicians including Joan Armatrading and Mari Wilson. In 1994 Robert Plant and Jimmy Page (Led Zeppelin) invited Hossam to bring together a band of Arabian musicians and work on their reunion album No Quarter - Unledded, which was certified triple platinum. This led to Hossam joining Page and Plant on their historic reunion 1995/96 world tour. Since then, Hossam toured extensively with various artists, such as Pino Daniele of Italy as well as many of the top Arabian singers, like Cheb Khaled, Rachid Taha, Faudel and Yeşim Salkım, one of the most popular female singers from Turkey. Hossam released some thirty albums and two DVDs of Egyptian dance and world music, with many of them dedicated to percussion and rhythms of the world, and produced countless others.

He has also collaborated in composing and performing many award-winning film soundtracks, such as Stargate, Wings of a Dove, The Saint, The Hunchback of Notre Dame, Stealing Beauty, The Last Temptation of Christ, Stardust, Prince of Persia: The Sands of Time, Conan The Barbarian 3D and The Dictator.

Hossam performed with Sting on the Michael Parkinson TV Show. He won the New Age Voice Award for “Best Contemporary World Music” for his album Immortal Egypt in collaboration with Phil Thornton. He also joined the Masters of Percussion from Africa Ensemble for a concert at the Royal Festival Hall in London featuring the world famous Brazilian percussionist Airto Moreira. In 2007 he played a live show with the legendary Grammy Award winners Chick Corea, Isaac Hayes and Mark Isham. He composed and arranged music for Shakira’s album She Wolf (EPIC) as well as the single Empire.

In 2011 Hossam released the biggest album of his career, Rock The Tabla, a collaborative project featuring some of the world’s top musicians including A.R. Rahman, Billy Cobham, Omar Faruk Tekbilek, Manu Katché and Joji Hirota. Rock the Tabla earned Hossam a nomination for Best Artist in the Songlines Music Awards 2012.

Hossam was honoured in 2014 with the prestigious Taichi Traditional Music Awards (Chinese Institute of Music) for his project Bedouin Tribal Dance, depicting the traditional wedding rituals of nomadic Bedouins.

More recently, Hossam toured with Joe Bonamassa, including two special nights in New York recorded live for the “Joe Bonamassa Live at Carnegie Hall – An Acoustic Evening” special, which went to No.1 on the Billboard US Blues Album chart.

2019 was capped by a special performance alongside Loreena McKennitt at London’s iconic Royal Albert Hall.