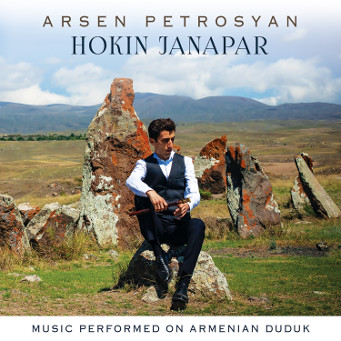 Hokin Janapar, recorded over two months but nearly five years in the making, is a collection of eleven pieces drawn from many diverse eras of Armenia’s cultural timeline. In an eerie historical parallel, while wrapping the album, Arsen found his country at war with neighbouring Azerbaijan. Concerned but undeterred, he and his team slept at the studio to complete the post-production and emerged to find Armenia a vastly different place. Another chapter of the resolute Armenian nation adding to the poignancy of Petrosyan’s latest project.

Following the success of his first solo release – Charentsavan: Music for Armenian Duduk, in 2015 – Arsen was compelled to reflect, revisit, and explore the music that means most to him, personally. His influences are wide and varied. Taking inspiration from sources as intimate as tunes that his father used to hum, Arsen has produced a collection of songs that elicit a spectrum of emotions, and that reflect the significance and weight of Armenian history. Hokin Janapar, meaning ‘my soul’s journey’ in Armenian, is a befitting title for Arsen Petrosyan’s thoughtful exploration into music that has stirred his soul and evinces the continued odyssey of the Armenian nation.

While diverse origins inspire the album’s artistic roots, they weave together beautifully with Petrosyan’s mastery of the duduk. Of ancient origins, the duduk is a double-reed woodwind instrument crafted from apricot wood and indigenous to Armenia. Regarded as one of the more dynamic and expressive agents of the woodwind family, the duduk can evoke intense sensations when in the hands of a master such as Petrosyan. Soulful, soothing, and often haunting, the duduk can convey and express the rich history of its lineage with tones that some may perceive as echoing an ancient reflection of Armenia and its people.

Arsen has emerged as one of his generation main proponents of the Armenian duduk. Following in the footsteps of established duduk masters such as Djivan Gasparian and his mentor Gevorg Dabaghyan, Petrosyan has managed to carve out his own pathway through diverse collaborations with Steve Hackett (Genesis), Emirati composer Ihab Darwish, and oudist Omar Bashir among others.

Although still relatively young, Arsen has amassed a wealth of accomplishments and experience over his short career. In addition to his active recording schedule, Petrosyan has toured across the world with his ensembles - A.G.A Trio and the Arsen Petrosyan Quartet - performing throughout Europe, Central Asia, the Middle East, and closer to home, in the Caucasus. He has also toured extensively as a solo artist in the United States.

It is said that to emit a sound from the Armenian duduk, one needs to blow what feels like their soul into the instrument. ‘Hokin Janapar’ would undoubtedly support this belief, as Arsen Petrosyan shares his poise, passion, and unmistakable talent with the world once more.