Hanitra’s inspiring new album ‘Lasa’ – from the heart of Madagascar 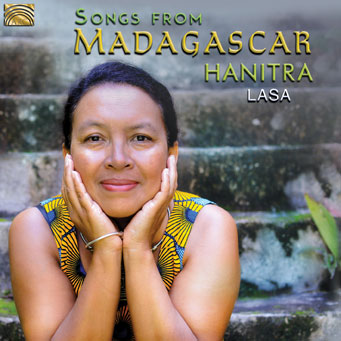 Few albums contain songs of deforestation sitting comfortably next to songs of same-sex love, maltreatment of wives and a rebellion of housewives. ‘Lasa’ does. This fine collection of 11 all-original new songs is the new release from a truly inspired Malagasy singer, Hanitra, who has lived and breathed music from the age of 7 when she first started playing guitar. And it shows. Hanitra’s seasoned vocals rise and fall effortlessly through an ever-changing landscape. ‘Lasa’ is as beautiful and varied as the land from whence its creator came. Madagascar.

Hanitra was born in a the south-central town of Fianarantsoa, a town that takes its name from the Malagasy for ‘good education’ and is in fact the intellectual and cultural capital of Madagascar. Having recorded her debut album with one of Madagascar’s leading bands Lolo Sy Ny Tariny in the late 1970s, Hanitra went onto represent her country overseas, constantly touring in France as well as concerts in Switzerland, Egypt, Finland, the USA and Australia. Hanitra is considered one of Madagascar’s most well-loved and most respected world music singer/songwriters and she tells us why ‘Lasa’ is a special album.

As Hanitra says in her own words:

‘Music... fascinates me, it shapes me, it amazes me, it invades me, it nourishes me.... it brings me beautiful meetings, sweet dreams... During my journeys, I have met extraordinary people, women whose stories have inspired me. I dedicate this album to them…’

‘Lasa’ is dedicated to women, each song has a story to tell, sometimes sobering, sometimes joyful and sometimes a tribute but always gloriously melodic and sensitive heart-felt vocals. ‘Miroir’ is the only song on ‘Lasa’ which is sung in French,‘We’re building ourselves by reflecting what we put inside of us...’

Hanitra’s stories on ‘Lasa’ are sometimes an invitation to party and celebrate as in ‘Lalao’ while ‘Myriam’ touches on same sex relationships, ‘Love is not allowed for us, because we are two women’. ‘Eka’ is a song for women who have been maltreated by their husbands, and also for people forgotten by their leaders.

‘Maloy Aho’ roughly translates as ‘say what you got to say’ which is exactly what she does in ‘Lasa’ from the opening track ‘Avia’ or ‘Rebellion of the housewife’, ‘ During the sunset, everything’s calling me, home, husband, children, mother-in-law. But the only thing that I want, is to go... dancing .’

The album’s title track ‘Lasa’ has a double meaning, both as a Malagasy word that means to ‘go past’ and also a tribute to the Canadian-French singer Lhasa de Sela (1972-2010) who passed away before her time, tragically from breast cancer. Lhasa toured extensively with her album ‘The Living Road’ as well as

playing with Lilith Fair for several years, a concert tour and travelling music festival inspired by Canadian musician Sarah McLachlan. As Hanitra says in her own words,

“Lasa means to go (pass) away and I use it in double sense also as it was the name "Lhasa" of the singer Lhasa de Sela who died in 2010. At the beginning, I composed the song and at the end I found the name. But this song is dedicated to her for she was a great singer, a great person. And it is also for every female singer who has passed away and then we never hear about them … we forget them.’

Hanitra’s album is a loving look into the world of women. ‘Emancipation’ is about the love from mother to daughter, ‘To all those mothers, like you, who want to keep their daughters home as long as possible’.

There is even a song to Mother Nature, ‘Mivalo’ is a gentle protest song about the heavy deforestation of Madagascar including the cutting and sale of rosewood, ‘ I sold nature guided by greed. There are no more trees’... On ‘Lasa’ there is even a song ‘Ampela’, for the Vezo fishermen’s women in south west Madagascar.

Hanitra was crowned Best New Artist at the Jazz and World Music Festival, Vannes 2000, France and was nominated for Best Female Voice at the Voices of the Indian Ocean. Six previous recordings included from the earliest to most recent: ‘Madagascar Compilation’ (WDR World Network Production); ‘Maninona’ (Playa Sound Production), ‘Omeko anao’ (2000) and featured tracks on ‘Stars of Afro-Pop’; ‘Global Women’ (ARC Music) and ‘Discover Music from Africa’ (2016). ‘Any Aminay’ was self-published in 2010.

Hanitra’s voice has a timeless depth of emotion floating above a global groove of bass and rhythms, sharing stories with sensitivity and great beauty. ‘Lasa’ was recorded in 6 days by the sound engineer Rodolphe Gervais (Ray Charles, Egyptian Project, Idir,) at Studio de Faune in Montauban-de-Bretagne in France. Released globally through ARC Music on Jan 6th 2017.

The musicians on 'Lasa' are: