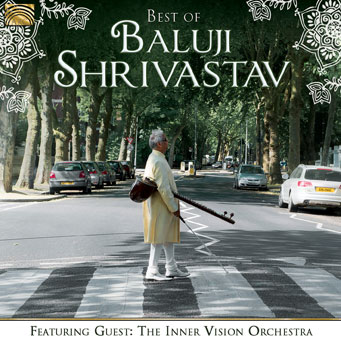 Virtuoso multi-instrumentalist Baluji Shrivastav, aka Mr Dhanonday Shrivastav OBE, has much to celebrate in 2017: the investiture of an OBE at Buckingham Palace from Her Majesty Queen Elizabeth II; a new documentary ‘Colours of Sound’ directed by Marie-Cécile Embleton and a new album ‘The Best of Baluji Shrivastav’. The national GG2 Leadership Award for Achievement Through Adversity recognition was also presented to Baluji Shrivastav in late 2016.

Baluji Shrivastav’s new album – ‘Best of Baluji Shrivastav’ – is a collection of 14 instrumentals and songs from a personal collection of Baluji’s journey from India to Britain and the trials and tribulations on the road to the musical success he celebrates today. A journey that started almost 5,000 miles away in Baluji’s birthplace in the north Indian state of Uttar Pradesh.

Baluji Shrivastav’s musical triumphs grew from personal tragedy. Blinded from glaucoma at the age of 8 months old, Baluji Shrivastav attended Ajmer’s Blind School in Rajasthan where he learnt a wide range of traditional instruments including the sitar, dilruba (the stringed ‘heart-robber’), surbahar (bass sitar), pakhavaj (barrel-shaped, two-headed Indian drum) and tabla. From here, Baluji went on to graduate from University of Lucknow with a BA in Vocal Studies and Sitar, followed by a further BA in Tabla and an MA in Sitar from Alahabad University.

In 1982, Baluji moved from India to London, where he married songwriter and composer Linda Shanson and pursued his musical career and work as a campaigner for the positive impact of blind people in society. The instrumental trilogy ‘Discovering London & Friendship’, ‘Walking Through The Streets’ and ‘Mixing with the Crowd and Spirit of Joy’ are personal reflections of what it was like for Baluji to arrive in London from India and then make this cosmopolitan city his home, never having seen it, only ever hearing it.

By 2008, together with his wife Linda, Baluji established the Baluji Music Foundation, a London-based charity which recognises and supports blind musicians. The charity particularly welcomes the participation of disabled people in music, and has thus founded the Inner Vision Orchestra of blind and visually impaired musicians.

Baluji Shrivastav’s abilities to inspire and forward a cause unite in his work as both founder and director of The Inner Vision Orchestra, an ensemble of 14 blind and partially sighted musicians who perform songs reflecting their diverse musical and cultural backgrounds including Iran, Lebanon, Japan, Afghanistan, India and Nigeria. This London-based orchestra celebrate the power of music to transform lives and have done 6 national UK tours.

‘Best of Baluji’ is an expressive, diverse journey in which Indian classical ragas such as ‘Folk Melody based on Raga Des’ and ‘Raga Dhani’ sit comfortably side by side a soulful love ballad written by his daughter, Leela Shanson, called ‘The Way I Feel’. This song features Baluji on a double-tracked dilruba, Egypt’s master tabla player Hossam Ramzy, Andy Sheppard and Guy Barker.

The life, music and accomplishments of London-based Baluji Shrivastav are nothing short of brilliant. In early 2017, Baluji Shrivastav will receive an OBE in recognition of his work as "Musician, Instrumentalist and Founder, Inner Vision Orchestra, for services to music." Blinded from an early age, multi-instrumentalist Baluji overcame immense personal difficulties to become one of the world’s most respected and well-loved sitar players.

Baluji continues to perform and record with some of the world’s greatest tabla accompanists such as Anindo Chatterji and Ustad Fayaz Khan as well as recording albums with Stevie Wonder, Massive Attack, Annie Lennox, Noel Gallagher and Madness. In 2012 Baluji performed at the Closing Ceremony of the Paralympic Games alongside the British Paraorchestra and Coldplay. ‘Best of Baluji Shrivastav’ will be released through ARC Music on 24th February, 2017 with an album launch in London at RichMix on Sunday 26th February at 6pm.