Otava Yo turns Russian folk songs into powerful dance music with its new Russian Beat. The band “can take great concert halls by storm with their Slavic temperament and fire. . . an authentic example of what happens when the classic Russian Ivan gets into a groove." (Kiviberg, Viljandi Folk Festival) 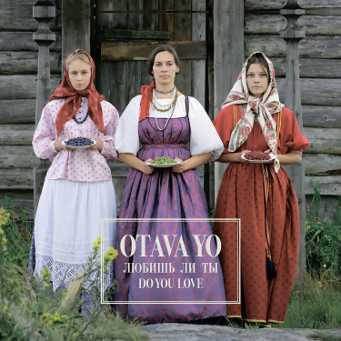 Special Note: The album DO YOU LOVE has several official music videos and one of these is a smash hit on YouTube with over 25 million views for Sumetskaya (Сумецкая)

DO YOU LOVE is a selection of 9 traditional folk songs from Otava Yo about rural village life and customs in Russia, from family honour, love and marriage through to brooms made of brushes, maidens who sew flax, village log dancers and ‘Guelder-Rose Berries’. Striking vocal harmonies sit atop diverse and spacious, organic percussion, giving the songs a chance to breathe and the stories a chance to be heard. The group combine their serious love of folk music with humour and joie de vivre.

DO YOU LOVE contains a diverse mix of folk instruments including the ethnographic versions of the gusli (Russian village psalterium) and double-reed fife - a unique Russian woodwind instrument; the end-blown kaljuka wooden flute; woodblock; fiddles; banjo; panpipes; glockenspiel; the 3-stringed wooden triangular balalaika and the single-reed woodwind chalumeau, a predecessor of the clarinet.

“Otava means any kind of grass which appears in the same place, 2-3 weeks after it has been cut. It is not a special kind of grass, it is just ordinary grass, for example the grass which grows in your front yard or on the side of highways, which has to be to cut back every few weeks as it grows fast. This new growth is called ‘otava’ in Russia.”

Although the album’s title track ‘Do You Love?’ is not a widely known folk song, it contains values that mean a great deal to the band with themes of enduring basic human values such as love of one’s parents, children and one’s homeland. ‘Do You Love?’ is a kind of universal folk song with values that remain unchanged no matter what is happening in the world, values which are tenacious across both rich and poor society.

The immediate appeal of Otava Yo’s videos include warm-hearted humour, colourful on-set traditional dresses for the ladies, and for the men, ushankas (Russian fur hats) on their heads and white singlets on their chests!

The album cover image for DO YOU LOVE is a still from the video for the album track Oh, Dusya my Marusya (Ой, Дуся, ой, Маруся). As band leader Alexey Belkin says in his own words, this picture has great cultural significance:

“The cover is a modern reconstruction of one of the first coloured photographs, taken in 1904 by Russian photographer Prokudin-Gorskiy. This picture is very famous and we made a still on our video which gets lots of great feedback from our viewers.”

‘Oh, Dusya my Marusya’ is the story of searching for Russian folklore in disappearing villages as so many villagers move away to the cities for work and opportunities. The video won Best Music Video Award at the NYC Indie Film Awards in 2017 and is close to 8 million YouTube views.

It’s a dream come true when a music video goes viral; for Otava Yo this is the case with the video for the song Sumetskaya (Сумецкая) which has clocked up over a phenomenal 25 million views on YouTube to date. It features lively Russian log-dancers, known colloquially as buzniks, who engage in friendly village fighting and other acts of bravado with good humour all the way through.

Otava Yo is signed to the Charmworks Artist Agency, headed by Nick Hobbs, whose artist roster includes Charlotte Gainsbourg, Goran Bregović, Acid Arab, Selah Sue and Stephan Micus. Otava Yo performs extensively throughout Russia, Europe and has toured 30 countries to date including performances at WOMEX and WOMAD UK. Along the way they met the President of Estonia and have been bestowed with the Bratislava’s Academy of Humour Award.

Otava Yo first met while performing on the streets of St. Petersburg in 2003, and from there have grown to become YouTube folk sensations. The band’s palpable comradery and insouciance are major factors in their live shows and online success, as Alexey Belkin says:

“… we love the music we create. So altogether it is a unique chance and privilege for us to keep on doing what we definitely love. We love the energy we have in our live concerts.”

DO YOU LOVE was initially released in Russia in 2018 on the Navigator label and has now been signed to ARC Music record label for international physical and digital release worldwide from 27th September, 2019.

With Otava Yo, one can expect the unexpected and most definitely not be disappointed…