From Macedonia to Mexico - Džambo Aguševi Orchestra Bursting with Brass 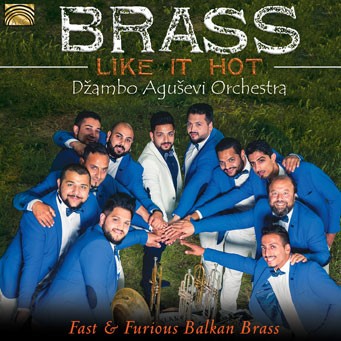 ‘Brass Like it Hot’ is the new album and first international release from Balkan brass band, Džambo Aguševi Orchestra.

All the tracks on ‘Brass Like it Hot’ – bar one – are composed by the charismatic leader Džambo Agušev who has become one of the youngest leaders of a Macedonian orchestra and professionally regarded as Macedonia’s ‘King of Trumpet’.

Fast-paced brass with hooks and stops make ‘Brass Like it Hot’ an instant crowd-pleaser as so finely demonstrated on the opening track ‘Fino Makedolatino’. The album is Džambo Agušev’s opportunity to showcase his compositional flair alongside the orchestra’s tight-panache.

From their first international showcase at WOMEX 2014, it was evident that the Džambo Aguševi Orchestra’s combination of flair and musical punch would secure them a solid touring schedule as a tour de trumpet force. They have now toured across 3 continents, making legions of fans along the way from festivals, tours and on many a wedding trail from Macedonia to Mexico, earning themselves the moniker ‘bandita gitana del momento’ – gypsy band of the moment.

‘Fino Makedolatino’, ‘Arriba’ and ‘Ziv mi tebe duso’ all bear the mark of a composer who knows exactly what fans want to hear. Born into a musical family in 1987, Džambo and his father both played in Uncle Agušev’s legendary brass orchestra. Džambo joined aged only 24 as third trumpet, undertaking a rigorous and tough training to bring the novice trumpeter up to professional standards, which he soon showed off to the world.

Džambo Agušev won his first major contest at the age of 11 at the world’s largest international trumpet fest held annually in the Serbian town of Guca. Regarded by some as ‘the wildest music festival on earth ... a crazy brass band festival’, each year approximately 600,000 visitors make their way to Guca – a town of only 2,000 inhabitants. The young trumpeter stunned judges in the ‘world category’ with his trumpet skills, which caught the keen ear and eye of renowned Balkan trumpeter Ferus Mustafov. Ferus Mustafov was fascinated by Džambo Agušev’s skills and sound, and dubbed him ‘Džambo’ meaning ‘very fast’, a rare skill at such a young age. The nickname stuck, and somehow it became Džambo’s way of living – travelling a lot, reaching distant parts of the world with different musicians, but keeping his band together at the same time.

Says Džambo in his own words: ‘ In a traditional brass band family, trumpet is treated like a person you love… As a trumpet player my goal is to share all the energy: happiness, grief and sadness I have in my soul and make people feel free to wonder… I want to travel the world and make people dance together, with no distinction, because when we all listen to music, we are one .’

‘Eat My Gypsy Lips’ combines the softer side of Džambo Agušev’s technical prowess and poise for perfect trumpet vibrato coupled with cheeky phrases that have no doubt helped to forge this brass orchestra’s brass stamp on the world.

Džambo Agušev heralds a new generation of great musicians from Macedonia to be recognized worldwide. ‘Brass Like it Hot’ will be released worldwide through ARC Music on September 30th allowing audiences from all corners of the globe to hear this entertaining and vivacious album for the first time.