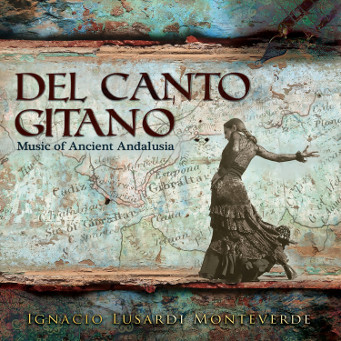 Inspired by connections discovered on his travels to India and the Middle East, Ignacio has composed this album to share the unique and historical blend of influences that combine to make Andalusian music such a rich tapestry of sound.

Greek, Roman, Sephardic, Castilian, Indian and Arabic are some of the many cultures and traditions that form the body of Ignacio's passion, infused as one to create a collection of songs that signify the mystical symbiosis of Ancient Andalusia.

The themes of travel and cultural influence are prominent in the journey through the songs. Recorded mainly in India, the album is arranged for flamenco guitar with interplays of baroque guitar, Greek violin and original Iberian rhythmic interactions merged with vocals from Victoria Couper and tenor Rupesh Gawas.

Born into an Argentinian/Italian family, Ignacio owned his first guitar at six years of age. He learned to play local folk music and tango songs alongside his siblings in their Buenos Aires home. Aged nine, he discovered Spanish guitarist Paco de Lucia's works, igniting his passion for flamenco.

The pursuit of his desire to play music led him to London, where he strengthened his musical connections to the world and particularly to Spain, the unofficial provenance of flamenco.

Now an acclaimed flamenco guitarist, producer and recording engineer, Ignacio has produced a vast array of recordings including collaborations with the Royal College of Music, Guildhall School of Music and Drama, and the British Museum, several of which took place at the iconic Abbey Road Studios. Ignacio has also worked with a diverse pool of global talents such as Ahmed Mukhtar, Eduardo Niebla and Baluji Shrivastav.

Ignacio channels his love of music into the live festival scene to complement his extensive studio work. He is currently working with the London Strings Festival and the Ketevan World Sacred Music Festival, having also worked with the Latin Baroque Festival of Buenos Aries. Other notable live appearances include playing at BBC Radio 3, the Indian National Theatre and the Iraq Babylon Great Theatre.

His peers have widely recognised Ignacio Lusardi Monteverde and, in 2019, he was presented with Musician of the Year by the Latin UK Awards. The following year he was assigned as a member of the Guild of Musicians and Singers.

In 2020 his outstanding contribution to music as both a performer and audio engineer were recognised when Ignacio was awarded an honoris causa by the North and Midlands School of Music at the level of Honorary Fellowship.

Del Canto Gitano is a masterful album that captures Ignacio’s talent and artistic vision. His delicate yetprecise tones on guitar are executed with great resonance and feeling. “Ignacio’s willingness to explore out of his comfort zone and reach out to other cultures speaks to his character." – Phil Manzanera