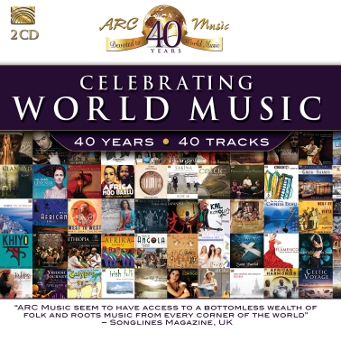 ARC Music has much to celebrate in 2016! As well as being in the top 3 WOMEX world music label for 2016, it is also the label’s 40th anniversary year as a dedicated world and folk label distributing music from over 120 countries. ‘Celebrating World Music 40 Years 40 Tracks’ is a world music odyssey featuring solo artists, duos and bands from Taiko drumming to African acapella; an epic selection that is being released to media only with 40 tracks to celebrate 40 years, from 1976-2016.

‘Celebrating World Music’ features music from the early days to the present, a story that started with music 10,000 miles from Europe, in The Andes, that was only heard in live venues before 1976. Bolivian folk music group Los Rupay were the first band to sign to the label in 1976 with a vinyl album called ‘Bolivian Folklore’. This album has not only survived the entire evolution of analogue to digital but is still a strong seller today, 40 years on! Los Rupay perform ‘Shilli condor’ on ‘Celebrating World Music’.

From the early days of the label to more recent years, the Irish catalogue remains a significant and strong component. Singer, songwriter, Noel McLoughlin was one of the first Irish artists to sign to the label while his album ‘Best of Ireland’ is a perennial best-seller and the ever-popular Irish traditional ‘Follow Me up to Carlow’ features on this collection. In 2015, ARC Music won ‘Best Compendium Album’ from LiveIreland for ‘The Ultimate Guide to Irish Music’ with liner notes by John O’Regan. Immediately prior to that, ARC Music had signed BBC Radio 2 Lifetime Achievement Award Winners Clannad for their first studio album – Nádúr – since the band’s 1998's Grammy winning ‘Landmarks’.

Moving towards the orient from Ireland we head over to Egypt joining ‘The Ambassador’ of Middle Eastern rhythms, Hossam Ramzy, master of star collaborations and a signature solo album series ‘Sabla Tolo’. Hossam was the first artist from the Middle East to sign to ARC Music and has produced 30 + albums released through ARC since early in the label’s history.