Ahead of new album, master taiko drummer Joji Hirota talks about 40 years of live performances, huge foldable drums and what it takes to be a taiko drummer 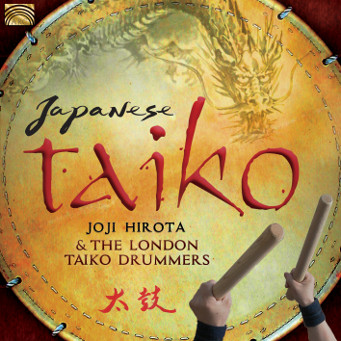 ‘Japanese Taiko’ is the new album by taiko legend, Joji Hirota and The London Taiko Drummers. It is a celebration of 40 years of world class drumming from Joji Hirota that has taken him from WOMAD to WOMEX and from Japan to England. Newsweek placed Joji Hirota in the Top 100 Most Respected Japanese People in the World. Joji Hirota has performed, recorded and toured with leading world and folk musicians including Guo Yue and Pol Brennan (Clannad). Together, as Trisan, they toured Europe, Canada, the USA and Japan, and in 1993 their first recorded album was nominated No.1 for ‘Best Contemporary Instrumental Music’ (Tower Records, NY).

Born in Hokkaido, Japan’s northernmost island, Joji was inspired by its rugged landscape of volcanos, hot springs and skiing; this vast and somewhat unpredictable landscape could well have been a drummer’s dream. Joji started drumming at the age of 11, studying music at the Kyoto Arts university, and became a master percussionist and instrumentalist and one of the first taiko masters to bring this craft of precision performance to the west. Joji Hirota has performed taiko for the last four decades in London and worldwide.

The word ‘taiko’ is Japanese for ‘big, fat drums’ and ‘Japanese Taiko’ celebrates all sizes and shapes of taiko. The smallest drum played on ‘Japanese Taiko’ is the uchiwa tom (aka the fan drum) with a diameter of 15cm. The uchiwa was designed by Joji’s taiko master, Toru Hatamoto. The largest drum Joji plays on ‘Japanese Taiko’ is a whopping 140cm in diameter, the world’s first foldable ‘oh daiko’ (literally ‘large drum’).

As Joji says in his own words: “I create Taiko music in a new contemporary style while keeping the grace and high energy of the traditional Taiko music of this heritage. I believe I have achieved this with my Taiko team.”

‘Japanese Taiko’ was recorded at Angel Studios and The Old Chapel in London and mastered by Cicely Balston at Air Studios London. It was produced by Joji Hirota and features nine of Joji’s original compositions among its twelve tracks. Fascinating and multi-layered Japanese rhythms, played on a large variety of drums and percussion, conjuring images of festivals, fishermen fighting the ocean waves and dragons soaring. Joji demands extremely high levels of performance ability and commitment from his team. The London Taiko Drummers includes four male drummers and eight female drummers and have been performing with Joji for over six years. Joji explains exactly what he looks for in a taiko drummer: “Cooperation, good spirit, musicality, higher skills and continuity of training”.

Joji Hirota often composes for BBC Drama; the Wildlife Survival documentary TV series - a collaborative project with Anthony Phillip; a Japanese documentary film by NHK (Kumano Kodo Heritage). His music has been used worldwide including the recent Martin Scorsese film “Silence” released in 2017. The origins of Taiko music are said to lie in old Japanese folk music, Noh theatre, Kabuki, Buddhist and Shinto religious music, but since the 1960s Taiko drumming as a performing art has progressed extensively to this day thanks to the work of taiko legends such as Joji Hirota.

Fast-paced taiko drumming with precision timing, there is nothing quite like it in the world. ‘‘Japanese Taiko’ is released globally through ARC Music on the 28th April, 2017.

« Khamoro, The Band that Brings A Little Sun to the World
Songs from Mexico by ‘Queen of Mexican Song’, Yuly Tovar »