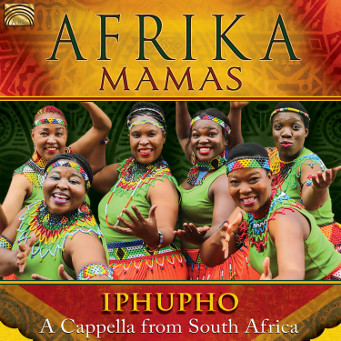 ‘Iphupho’ is an all-original and all new album of heartfelt stories, real experiences and sublime harmonies sung by the 6-piece South African group, Afrika Mamas. As much a sisterhood as a musical group, these six women work hard and sing with a palpable strength and sensitivity that is undeniably African and unmistakenly powerful.

Afrika Mamas sing practical songs about their lives as single mothers in Durban, South Africa, as women in a heavily male-dominated music scene. Their songs are their stories and the first story starts with the making of this very special album.

The album’s name and title track, ‘Iphupho’ or ‘The dream song’, was written by Ntombi Lushaba and focuses on her dream to take Afrika Mamas' music to the world, inspired by Ladysmith Black Mambazo. This dream came true when Afrika Mamas found themselves recording ‘Iphupho’ at Durban’s United Rhythm Studio, a place of great significance in African a cappella record-making.

United Rhythm Studio was co-founded in 2004 by Sibongiseni Shabalala and actor Mthandeni Mvelase (Father Christmas Doesn’t Come Here, 2009). Sibongiseni Shabalala is the son of Joseph Shabalala, founder and former musical director of 4 times GRAMMY Award winning musicians, Ladysmith Black Mambazo. Sibongiseni Shabalala has now stepped into his father’s shoes as a member of Ladysmith Black Mambazo. ‘Iphupho’ is Afrika Mamas fourth studio album and was produced by one of South Africa’s top world music producers, Maghinga Radebe, one of the most well-respected maskandi guitarists and music producers in South Africa.

In keeping with the vocal a cappella traditions of Zulu culture, Africa Mamas have produced an all-original and all-new album of their stories and struggles in a largely male-dominated society and music industry. South African a cappella, aka isicathamiya’ (pronounced as ‘izzee-cat-a-meeya’), meaning to ‘tread carefully’ or ‘walk softly’, started as a predominantly male vocal tradition. Afrika Mamas are on a mission to break with stereotypes, to both educate and entertain audiences with their folk tales.

‘Lapha KwaZulu’ (‘things are happening’) is a song of the struggles faced by the dwellers of KwaZulu who often live without electricity or modern sanitation, ‘abanye debase bayitholimpucuko think sisadla ngoludala’ – ‘people who live in the suburbs have everything, and we are still struggling’.

‘Iphupho’ has songs of the struggle of survival as in ‘Emgodini’ which translates as ‘hole’, a song about a South African miner, and ‘Amakhekhe’, the cookie or cake song. It is usual in Johannesburg for women to make cakes and then sell them on the streets in buckets to make money. This daily occurrence is celebrated in this song. ‘Imbokodo’, a word meaning ‘rock’ celebrates the strength of women who carry their unborns 9 months, ‘when you touch a woman, you strike a rock.’

Afrika Mamas was formed and founded by Afrofolk singer Tu Nokwe, in 1998, and now comprises six powerful singers, a singing sisterhood, taking solace and professional strength from working together so closely. The range of vocal tones in the group cover every pitch of the musical scale which is used to perfection on ‘Iphupho’, not to mention, also in their personal lives. Between the members of Afrika Mamas, they have eleven children.  ‘Iphupho’ releases internationally through ARC Music on the 23rd February 2018.

4**** stars, Westzeit, review by  Karsten Zimalla
“I find the a cappella singing of South African AFRICA MAMAS very exciting in their new CD (ARC Music). Traditional Gospel stories of the everyday lives of 7 single mothers who came together to form this choir.”

4**** stars InMusic, InHard review by Bernd Lorcher
“…warm and expressive, harmonic voices for each of the individual pieces…  Africa Mamas have been nominated in the past three times for the South African Music Awards. Recommended!”