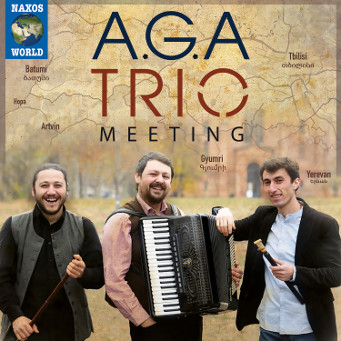 Exposing a hidden history of Caucasus, the Mountains

For thousands of years, there have been many cross-encounters over the mountainous border of Europe and Asia. During peaceful times, people danced hand-in-hand in village squares; during wars and genocide, lamentations were sung from caravans seeking safer lands. A.G.A Trio is formed by three virtuoso musicians who have pieced together tales of self-discovery, heritage, love songs of bards, laments for the fallen, respect for nature and ultimately, the meeting of peoples across the beautiful Caucasus mountains.

“Song and dance have long been used to articulate feelings and beliefs” – the opening track Erzurumi Shoror (The Dance of Erzrum) is a steadily-paced tune over six minutes with rhythmic accordion underlying the harmony of flutes, painting a beautiful scene of dances and the unison of diverse cultures.

Adanayi Voghpe is an emotive lament with an underpinned drone behind oscillating, song-like flute, in dedication to those who fell in the 1909 massacre of the Armenians by Young Turks, a leading political movement in the late
Ottoman Era. "Bingyol means violently flowing water, a metaphor for the oppression of Armenians in areas of Anatolia in the late Ottoman era. When masses of people were forced to relocate as their friends and neighbours started vanishing in the nights, it was no longer a safe place to call home.

Noubar-Noubar & Yare Mardu is a clever arrangement of a love song and a 20th century bard song, represented instrumentally as the parlance of lovers. Strong accordion-driven passages are ‘answered’ by crooning flute, both accompanied on guitar.

Naz Barı & Nazpar & Halay is an original piece inspired by recordings made in Anatolia in the 1950s. The original research captured songs from the villages, fields, at weddings, marketplaces, farewell parties for soldiers, festivals and other special occasions. Unfortunately, errors and deliberate manipulation of these recordings ensued, for example where Azerbaijan is listed as place of origin, an Armenian composer is credited in contradictory archives. A.G.A Trio feels strongly about presenting factual history, and respectfully deny correct sources be forgotten. This track is a delightful potpourri of folk songs combined into one piece, remaining faithful to the original research.

“Here, in your rugged majesty of rocks, toppling tress and mass of waters… dolphins gambol in the lion’s den!” – The Caucasus Mountains, Lord Byron (1788-1824)