A Tribute to Greece 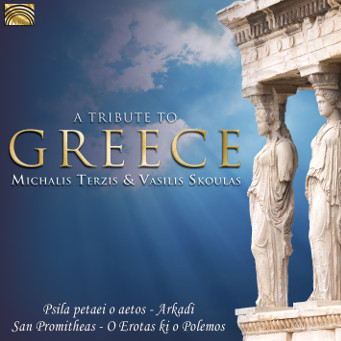 ‘A Tribute to Greece’ is a new collection of 13 original compositions by Michael Terzis. The album includes a wonderful collection of Grecian folk instruments including Cretan lyra, bouzouki, santouri, tzouras as well as violin, vocals and classical guitar.  Michalis Terzis is one of Greece’s most prolific and distinguished composers. Sung by the prominent Cretan singer Vasilis Skoulas, the songs create a warm and pleasant atmosphere.

Michalis Terzis is an award-winning Greek composer. He won multiple awards at several international Greek film festivals for his music, such as “The Flea”, a Dimitris Spyrou film which has won prizes at twelve international film festivals around the world since 1998, as well as “Dans le pays D’Orphee” and “Limnos the Cherished”, both A. Papadopoulos and ERT documentary films. “A!” was awarded First Prize for the music and the documentary, overall, by the Municipality of Asty, Italy in 1988.

Michalis’ music for the documentary “The Magic of the Greek Caves”, an international production of the Greek Documentary Centre by Panos Ipfandis and Tasos Birsim, was released in twelve languages by 40 TV stations around the world and aired on all Olympic Airways flights in 1999.

Vasilis Skoulas hails from the island of Crete and was born to a family steeped in musical tradition. His grandfather Michalis Skoulas was a great lyre player of his time and his father, Alkiviades Skoulas (aka. ‘Grylios’), was an important painter in Anogeia. Vasilis Skoulas began to learn to play lyre at the age seven, and by age 16 had established himself among the best lyre players and singers in Crete and now recognised internationally. In September 2017 at the International Fair in Thessaloniki, he was honoured for his contribution to Tradition by the Chairman and the Board of Directors of the International Fair. Vasilis Skoulas continues to create with passion and runs his own venue, the well-known tavern “Delina” in his village Anogeia on Crete.

‘A Tribute to Greece’ is released internationally through ARC Music on 23rd March, 2018.