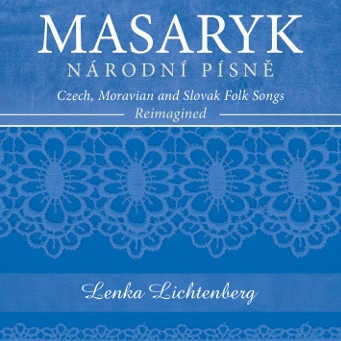 Multi-award winning Czech-Canadian singer Lenka Lichtenberg has a new album – ‘Masaryk’ –  a collection of 14 Czech, Moravian and Slovak folk songs that permeated Lenka’s early childhood and provided much of her introduction to folk music. ‘Masaryk’s’ sub-title ‘Národní písne’ translates from Czech as ‘songs of the nation’; and these songs are as important to the roots of the regions folk traditions, as they are to Lichtenberg’s own life-long musical journey.

The album celebrates the work of prominent politician and accomplished pianist Jan Masaryk (1886 – 1948), the son of Czechoslovakia’s first president, Tomáš Garrigue Masaryk, who made music part of his political life. Author John Gunther in ‘Inside Europe Today’ (1961) described him as “a brave, honest, turbulent, and impulsive man" and beyond being a popular politician and musician, he was also a well known public broadcaster during WWII. A new film about his life “A Prominent Patient” just won 12 Czech film awards. The song ‘Ach, synku, synku’ (Oh, my son, my son) was his father’s favourite, and speaks of hard work, responsibility, taking care of things – all qualities greatly admired by the nation’s founding father.

Cultural explorations through songs, music and poems have long been a hallmark of Lenka Lichtenberg’s work and ‘Masaryk’ once again brings that to the fore. First recorded for RCA Records in 1942, with Masaryk accompanying beloved soprano Jarmila Novotna on piano, these songs are interwoven into Czechoslovakia’s history. The lullaby ‘Dobrú noc, má milá’ (Good night, my darling) was often sung to Lenka by her mother, and ‘Horro, horo, vysoká jsi’ (Mountain, high mountain) was widely taught in primary schools across the country when she was growing up.

“Mountain, oh mountain, you are so high/ and you, dear maiden, how far away you are/ behind the mountain range - and our love is fading away/ It will keep fading until nothing remains of it/ Then, there’ll be nothing at all left in this world to bring me joy.”

Lenka describes in her own words how she arrived at resurrecting this classic collection of folk songs:

“I received the song book as a gift from my mom, when it was briefly available in stores in 1968… When I left Czechoslovakia, the songbook went with me, and has been my resource for Czech folk music ever since, no matter where I am in the world. In recent years, I have been performing more and more in the Czech Republic. Three years ago, after a synagogue concert in Prague, I suddenly had the epiphany: why do I so seldom sing in Czech? And I immediately had the complete concept in mind, to arrange and record the Jan Masaryk songbook with which I was so familiar. My mother had been ill for some years, but I managed to play for her the first recorded tracks of the project, just before she passed away in July, 2016. This project was done in her name; she gave me this heritage and love of traditional culture. My grandmother’s favourite folk song is also on ‘Masaryk’, ‘Teče voda, teče’ (The water is flowing, flowing).”

Lenka freely admits that her ‘signature’ song on the album has always been ‘Láska, bože, láska’ (Love, God, love), “To my ears and heart, it is so beautiful!  I learned it when I was maybe 12, and never stopped loving it. I often put it on a program of music of quite a different genre. That song is really me, somehow.”

In order to pay homage to the original RCA sessions, Lichtenberg incorporated audio samples from some of the 1942 recordings, such as on ‘Ach, není tu, není’ (Oh, it is gone, gone) and ‘Zdálo se mně, má panenko’ (Dear maiden, I had a dream). The approach highlights both the nostalgia and modernity of the project.

Lenka Lichtenberg is a Canadian singer, composer, songwriter, animal rights activist and chazanit of Czech-Jewish descent. A Jewish musician trained in the vocal arts, she can often be found leading congregations in prayer.  Born in Czechoslovakia and raised in Canada, Lenka’s personal commitment to the Yiddish music traditions have earned her multiple awards and a dedicated fan base.

‘Yiddish Journey’ (2016) explored 18 Yiddish traditional and original songs while ‘Lullabies from Exile’ (2014),   co-produced with Yair Dalal, included songs from Eastern Europe and Iraq. ‘Songs for the Breathing Walls’ (2012) included live liturgies while ‘Fray’ (2010) was a collection of original songs in Yiddish and English. ‘Pashtes’ (2006) was an all-Yiddish composition based of the poems of the Yiddish poet, Simcha Simchovitch.

Coupled with a passion for humanity and peace, Lenka Lichtenberg has immersed herself in the soundscapes of Toronto’s Middle Eastern, Indian and Brazilian communities which continue to shape and mould her music, rooted in her Eastern European heritage. It was here that Lenka rose to recognition on the world stage as a recording artist and a vocalist with an ability to sing in 6 languages, namely Czech, English, French, Hebrew, Russian and Yiddish. ‘Masaryk’ is Lenka Lichtenberg’s seventh solo studio album and is arguably her most personal and evocative album to date. Released worldwide through ARC Music on 22nd September 2017.